Police say man was shot in abdomen and leg 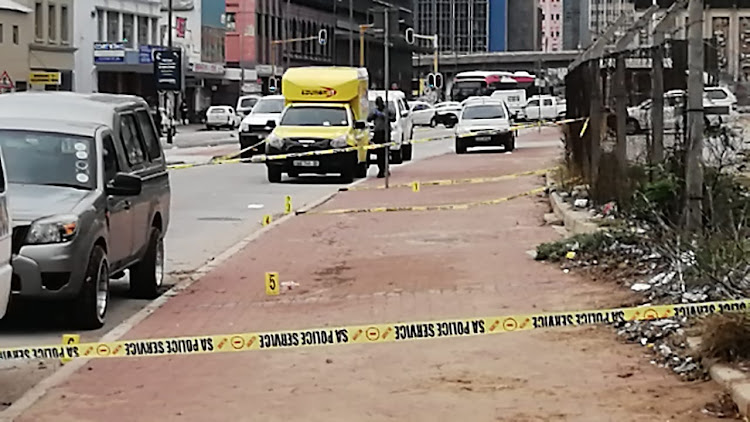 The scene where a Port Elizabeth business owner was shot while trying to intervene with the hijacking.
Image: Eugene Coetzee

A Port Elizabeth man was shot and injured after stumbling onto a hijacking, which quickly spiraled into a gunfight in Govan Mbeki Avenue.

The shootout took place at about 9.30am on Tuesday when five men attempted to hijack a courier van at the intersection of Evatt Street and Govan Mbeki Avenue – opposite Brister House.

Police spokesperson Colonel Priscilla Naidu said the courier van driver and his assistant had delivered packages to nearby shops when they were accosted while walking back to their vehicle.

“The driver and the passenger had gone separate ways to do deliveries at different shops in the vicinity. While the driver was walking back to the van he was approached from behind by a gunman who placed the firearm against his back and told him to walk.

"A person sitting on the pavement then joined in as well as a further two suspects. In total, four suspects were involved.

"During the incident, a suspect got into the van while the other three held the driver at gunpoint and forced him to walk to the back of the van. He had given them the vehicle's keys,” she said.

During the incident a businessman- who saw what had happened - ran out to assist.

Naidu said the 48-year-old man fetched his firearm from inside the shop and ran back out to assist.

“He yelled at the suspects, prompting three of them to run away. A gunfight then ensued between him and the last suspect,” she said.

“Several shots were exchanged and the shop owner was struck in the abdomen and leg.”

Naidu said the remaining suspect then fled on foot.

“It is unclear if any of the suspects were injured in the shooting. The wounded man was taken to hospital in a private car where he is receiving treatment."

Attempts to get hold of any other staff members at Sheldons Motor Spares failed.

Naidu said the man’s condition was not known.

A case of attempted hijacking and attempted murder is under investigation.