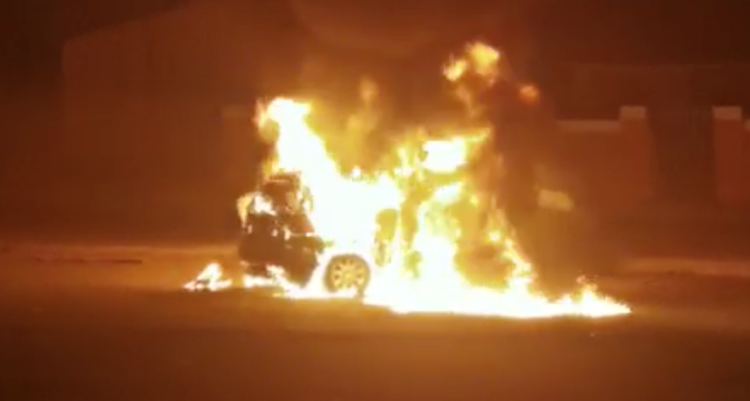 A hijacked car was torched in  Uitenhage on Thursday night sparking fears that it was show of force by gangsters who were  mourning the death of an alleged hijacking gang member.

The incident took place shortly after Lunga Pongoma, 35 - who has been in and out of jail for a series of crimes - was shot dead in his bed during a suspected gang-related hit murder earlier on Thursday.

Police spokesperson Captain Mali Govender said the VW Golf was torched after a 56-year-old man and his wife were thrown out of their car while driving in Huna Road, KwaNobuhle, at about 10:15pm.

“Three men armed with firearms knocked at the car window. The suspects then forced the couple out of the car and drove off with it. Moments later, police recovered a vehicle, less than a kilometre from the scene, burning in Matanzima Road, KwaNobuhle,” she said.

Asked if it was linked to hijacking syndicates and the death of  Pongoma  Govender said: “At this stage, police cannot confirm any linkages to this crime, however investigations are continuing."

Provincial Commissioner, Lieutenant General Liziwe Ntshinga said: “The police will be stamping the authority of the state by re-claiming the streets from criminals and protecting innocent people."

Pongoma was shot inside his home in Dalindyebo Avenue, KwaNobuhle, Uitenhage at about 2am on Thursday.

During the murder a bullet grazed his seven-year-old daughter's upper body.  She was later rushed to hospital and was said to be fine.

At the time of Pongoma's murder he had no pending cases against him.

Concerns of a gang retaliation or shootings at Pongoma's upcoming funeral spread to New Brighton with a message on social media warning residents to not send their children to school.

Police spokesman Captain Andre Beetge said police were aware of rumours and message warning that children not to go to school in fear of gang retaliation.

"We are aware that funerals are marked for Friday and the weekend. We have been informed about the messaged circulating on social media warning parents not to send their children to school. We do not know where this message originated or who is circulating it. Currently, we have no related incidents."

Last week, in the Bay alone, nine hit-style murders were reported over a seven-day period.

Police suspect some of the cases are linked to fighting between owners of Small Medium and Micro Enterprise (SMME) owners  while others are linked to witness killings and internal fights among gangsters.

All the cases are under investigation by the provincial organised crime team to consolidate the information.