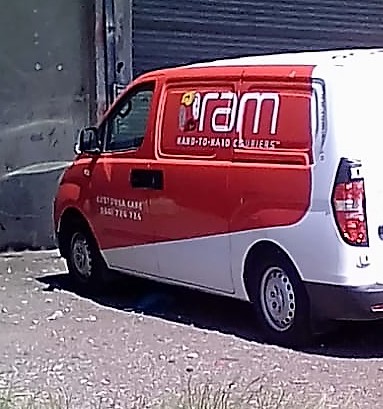 The courier vehicle found back in Korsten after being hijacked
Image: supplied

Two Ram Hand to Hand Courier workers were locked in the back of their delivery bakkie after it was hijacked in Nelson Mandela Bay on Friday.

The hijacking happened in Durban Road, Korsten, at about 9:30am .

By 10am, policed have recovered the vehicle, and found the two employees locked in the back, in the nearby Desmond Street, Korsten.

This is the second delivery vehicle hijacked this week.

“As the driver and his assistant were walking back to their vehicle, three men approached them.

“One had a firearm in his hand and ordered both workers to get into the back loading section of the courier van.

“The two employees were locked inside while two of the suspects got into the front of the vehicle and started to drive,” she said.

“The third suspect followed the courier vehicle in their getaway car.”

Naidu said when they stopped in Desmond Street, the suspects opened the back of the van and off-loaded “several” packages.

“The one staff member managed to call their offices from the back of the van who in turn alerted police to their location,” she said.

“The two workers were found, unharmed, locked in the back of the van.”

Naidu said the value of the goods being transported was unknown.

“At this stage it is unknown what was taken as the company needs to do a full inventory [check] to assess what stock was being delivered.”

In an unrelated hijacking, on Tuesday, a gang of robbers managed to steal several boxes of meat from a hijacked refrigerated delivery truck.

The truck, belonging to Henen's Meat Market in North End, was hijacked while doing a drop-off at Shoprite in Daku Road, Kwazakhele on Tuesday.

The 69-year-old driver was forced to abandon the truck when three gunmen ambushed him at about 11am.

By 11:15am the truck was recovered abandoned in Seyisi Street, New Brighton.

No arrests in neither case have yet been made.