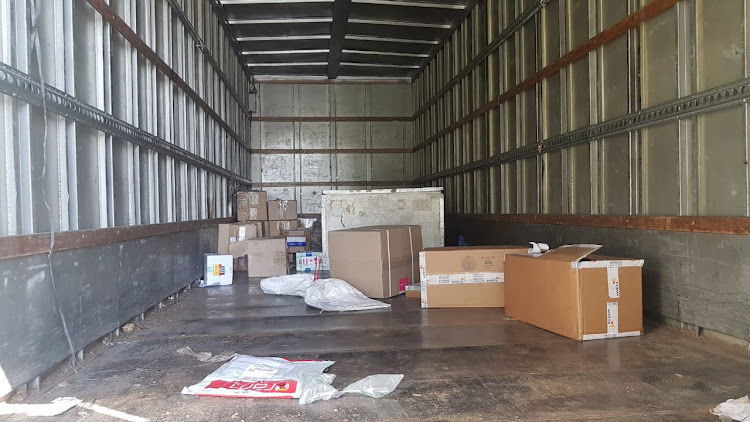 The back of the courier van that was allegedly hijacked by men pretending to be traffic officials
Image: Supplied

A gang of hijackers took the law into their own hands - dressed in traffic cop uniform and driving marked traffic vehicles - allegedly hijacking a courier truck after setting up a roadblock on the N2.

The hijacking happened at about 7am on Wednesday when two white cars - a Volkswagen Polo and a Ford Icon allegedly marked with traffic insignia and blue lights - pulled a Ram courier truck over near the Hankey offramp (R331) along the N2 outside of Port Elizabeth. 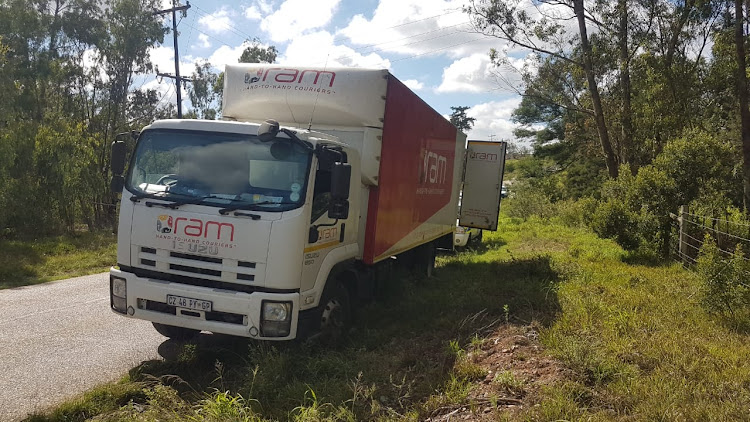 The courier van that was hijacked by men in traffic official uniforms and vehicles standing in Rocklands Road
Image: Supplied

Police spokesperson Sergeant Majola Nkohli said the truck was en route to Nelson Mandela Bay from George when it was pulled over at what appeared to be a random roadblock.

“There were at least four suspects and all were dressed in traffic official uniforms with firearms. They signalled the courier truck to pull off the road at a roadblock.

“A suspect, dressed in uniform, approached the courier van and demanded the driver handover his driver’s license,” he said.

“While this was happening, the suspect pulled out his firearm and demanded both the assistant and driver get out of the van. They were then ushered into the back of the Icon at gunpoint.”

Nkohli said the courier truck driver and his assistant were then kidnapped.

“They were told to keep their heads down by the two suspects, also wearing traffic official uniforms, who were driving the Icon. They then drove off,” Nkohli said.

“The suspects drove them to a bushy area near Motherwell where they were held hostage. The suspects tied the two victims' hands together with cable ties.”

“After waiting with them for about 20 minutes, the marked traffic vehicle sped off leaving them behind.”

Nkohli said the men found their way to the road side a short while later  and flagged down a passing motorist.

“They were both given a lift to the Motherwell Police Station.”

He said shortly after police were alerted to the hijacking, the courier van was found abandoned in Rocklands Road.

Only about 15 boxes were left in the back of the truck.

Nkohli said it is unclear at this stage what was stolen.

Asked what the exact traffic department markings were on the cars or the uniform, Nkohli said that was subject to investigation.

A case of hijacking and abduction is under investigation.