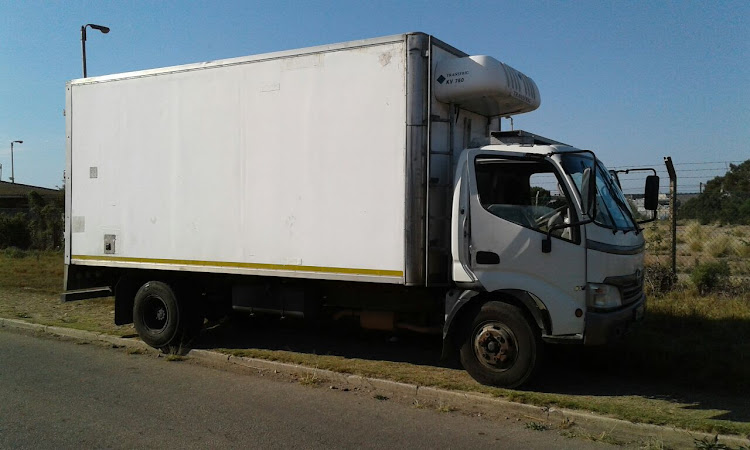 The meat truck which was hijacked in allegedly hijacked in Daku Road, Kwazakhele, on Monday afternoon.
Image: Supplied

A refrigeration truck carrying carcasses and boxes of assorted meat was hijacked in Port Elizabeth on Monday afternoon.

Over the past two weeks, more than 10 delivery trucks – carrying an assortment of stock – were hijacked in the Bay in separate incidents.

Police spokesman Captain Andre Beetge said the truck left the depot at about midday to do a routine drop off at Shoprite in Daku Road, Kwazakhele, and then Kenako Mall in New Brighton.

“The driver and two assistants arrived at the Shoprite but were waiting for a free spot in the parking bay to offload meat. While waiting, the two assistants went into the shop but when they came out the truck was gone,” he said.

“The staff alerted the owner who in turn managed to alert the police who found the truck abandoned in Avenue E in New Brighton.”

Police then searched for the driver who had been taken by the hijackers.

“He was later found near Struandale after being dropped off by the hijackers. He said that two men with firearms hijacked the truck and forced him in a quantum mini-bus. He was ordered to lie flat on the mini-bus floor before being dropped in the Struandale area,” he said.

“The suspects then drove off with the truck.”

Beetge said the company would have to do stock take to determine the value of the items stolen.