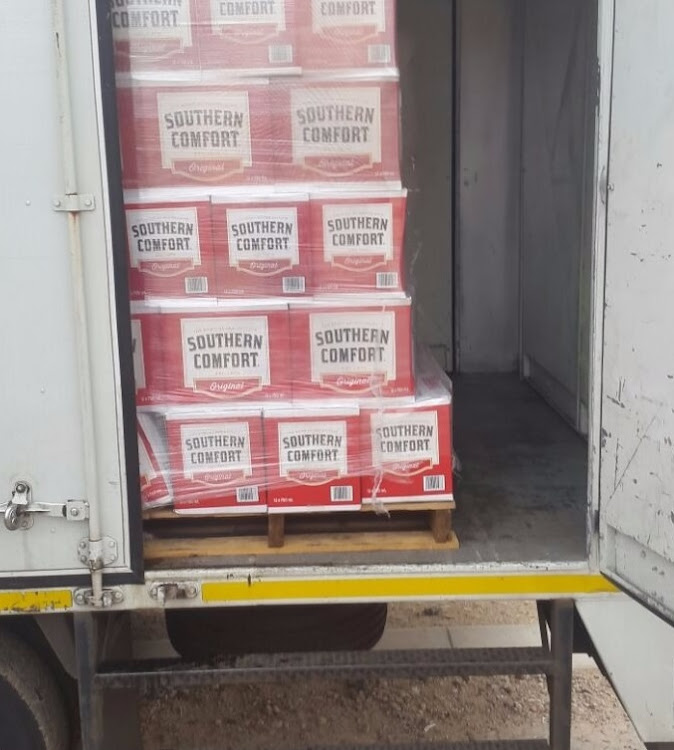 Police recovered the hijacked liquor truck only 10 minutes after it was taken
Image: supplied

A truck transporting liquor worth more than R1m was hijacked outside the Showground Liquor Store in Sydenham on Thursday morning.

The truck was parked outside the Old Uitenhage Road store preparing to off-load when it was hijacked by three men shortly before 8am.

The truck was loaded with several pallets of expensive alcohol including high-end whiskey and bourbons valued at about R1.2m.

Over the past two weeks, more than 10 delivery trucks – carrying an assortment of stock – have been hijacked in the Bay in separate incidents.

Police spokeswoman Colonel Priscilla Naidu said the truck pulled up to the store but the loading bay was not yet open.

“The truck was carrying stock to be off loaded at the store. The driver then parked the truck and walked towards the admin offices to ask about opening the gates,” she said.

“As he was walking towards the office, he noticed a minibus pull in behind the truck. He thought that it was suspicious so ran towards the neighbouring business to call for help.”

Naidu said the man ran out only to find the truck driving off.

“The truck had three staff members inside at the time of the hijacking. They were taken with during the hijacking and then dropped off in the Veesplaas area,” she said.

“Police were alerted to the hijacking and the truck was found by Flying Squad about 10 minutes later in Dyasi Street, New Brighton. Several boxes are believed to have been stolen however the majority of stock was still inside the truck.”

Naidu said the three staff members were unharmed during the incident.

On Monday, a refrigeration truck carrying carcasses and boxes of assorted meat was hijacked outside Shoprite in Daku Road, Kwazakhele.

The truck was found abandoned in Avenue E in New Brighton a short while later – all the meat had been stolen.

Naidu said that a case of hijacking was under investigation.