Despite working extra shifts during the pandemic, Dr Emma Gardiner remains cheerful and takes things in her stride 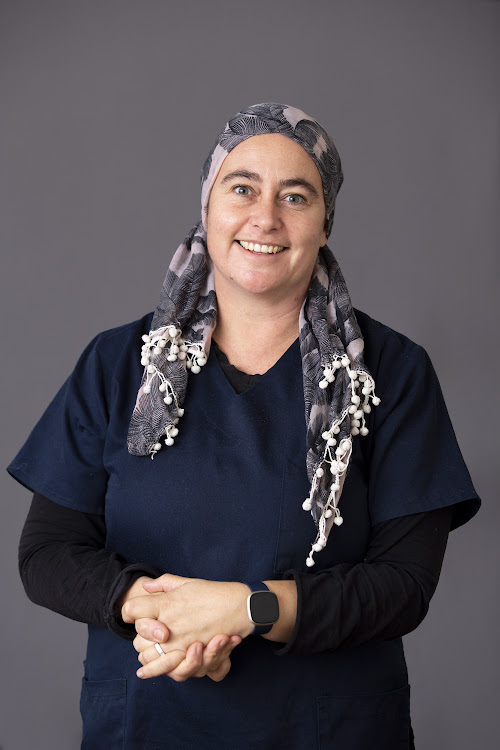 Dr Emma Gardiner was a senior registrar when she developed a love for rheumatology, largely as a result of her work with professor Thozama Dubula, who had started the Rheumatology Unit at Livingstone Hospital in Port Elizabeth in 2012.

“When he left, I realised that I had to step in, despite not having a rheumatology certificate and the experience and expertise,” says Gardiner.

“Rheumatology is a neglected discipline in the Eastern Cape region, and I am hoping my research will define the scope of rheumatic disease in the western district of the Eastern Cape so we can further refine and develop our future needs.”

Gardiner has received a Rural Individual Award from the Discovery Foundation. Her research aims to improve rheumatological care for people in the Eastern Cape. She says the prevalence of rheumatological conditions is not well documented, and that she hopes her research will further the understanding in this field in the province.

Gardiner was born in Cape Town, but since the age of five has spent much of her life in Port Elizabeth. She matriculated at Theodor Herzl School, studied medicine at the University of Cape Town and did her internship in Bloemfontein. Shortly after that, she met and married her husband, Jadon, and they lived in Canada and England for two years. Their return to Port Elizabeth was supposed to be for only a few months, but 16 years and two children later, they haven’t left.

“Port Elizabeth has always been good to me,” she says. “There were some interesting times, though. I remember the time we had two small children and my husband was juggling an MBA and a master’s degree and I was busy with night calls and my Fellowship of the College of Physicians of SA exams.”

Gardiner’s passion for rheumatology shines through as she speaks of the tremendous suffering many patients in rural areas go through when their rheumatological conditions go undiagnosed and untreated. This can result in loss of function, and sometimes, loss of life, she says.

There is only one other rheumatologist in Port Elizabeth, Dr Jenny Potts, who works privately and assists in the Rheumatology Unit at Livingstone Hospital. Few patients have the means to travel to other large centres for treatment.

SPONSORED | Improving the surgical capacity of hospitals in rural areas would help many people have better access to care, says professor Kathryn Chu
Business
2 months ago

A digital approach to support the elderly and their caregivers

“The treatment of autoimmune diseases and connective tissue disorders such as rheumatoid arthritis requires holistic practice. A doctor can’t just focus on one specific area of the patient – these diseases affect all organs, with far-reaching consequences if neglected. Our patients suffer a tremendous burden and their care is specialised,” Gardiner says.

“One of my main goals is to assist them to return to a good quality of life while living with their condition. It is important to raise and maintain awareness, especially in rural areas.”

She speaks with great appreciation and admiration of her senior colleagues in rheumatology units at other academic institutions, who have provided tremendous support and guidance in the management of rheumatology conditions at Livingstone Hospital.

Gardiner also mentions the first Discovery Foundation Rural Distinguished Visitor Award the hospital received in 2014/15, which allowed her to invite rheumatologists from across SA to share their expertise and guidance. This is part of the reason why the department is now going from strength to strength, and the latest Discovery Foundation Award will help Gardiner to build on this foundation.

Satellites and specialists to boost health care in the Northern Cape