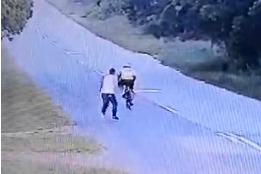 A cyclist was robbed of his cellphone in Kragga Kamma Road on Tuesday morning.
Image: CCTV footage screengrab

A Port Elizabeth cyclist was pushed off his bicycle during an early morning cycle on Kragga Kamma Road on Tuesday morning.

According to residents, the incident happened at about 6:30am on Kragga Kamma Road – near Cows Corner – between Amanzi Road and Louisa Road.

A cellphone was stolen during the robbery.

A nearby CCTV camera - mounted to a house - caught the incident on camera and shows a white vehicle reversing into the bushes shortly before the attack.

The car reverses behind a bushy area and a short while later, a man is seen walking down the road – repeatedly looking over his shoulder.

The cyclist veers out to widen the distance between them as he approaches the suspect.

As he passes, the suspect turns around, chases towards the cyclist and pushes him off his bicycle from behind.

They both fall to the ground, and the attacker lands on top of the cyclist.

Within moments of hitting the ground, the attacker jumps up and walks across the road, in the direction of the car parked behind the bushes.

The cyclist then picks up his bicycle before dropping it again and walking across the road.

A passing motorist is seen stopping as the car behind the bushes pulls out.

The cyclist then speaks to the driver of the passing vehicle.

While the attacker continues walking away, the car previously parked in the bush casually drives off.

The video then ends abruptly.

“From what we have determined is that the suspect was in the vehicle together with another man and woman.

“He then left the vehicle and during this time attacked the cyclist,” she said.

“The only item stolen during the incident is a cellphone.”

A Port Elizabeth cyclist was pushed off his bike during an early morning cycle on Kragga Kamma Road on Tuesday morning.