Security review after another cyclist attacked 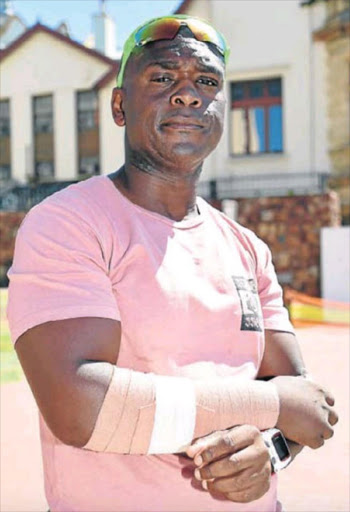 An emergency meeting between police, security companies and municipal officials was called yesterday following another attack on a triathlete training on the Ironman route. The meeting was convened following the incident early on Saturday when Mandela Bay Development Agency spokesman Luvuyo Bangazi was knocked off his bike and robbed. The brazen attack on Bangazi, on the corner of Sixth Avenue and Heugh Road, Walmer, comes just one month before the much-anticipated Ironman Africa Championships. Bangazi said that in the four years he had been cycling down Heugh Road, he had never experienced anything as traumatic as the 5am incident. He said two thugs wielding a thick, heavy log had knocked him off his bike, injuring his arm, before making off with his cellphone and bicycle. “I will hardly change my training plan, except that I might avoid that stretch of road until it is lit up, policed and safe again,” Bangazi said. He would not be deterred from cycling, especially in Port Elizabeth. “I have travelled [and] raced in South Africa and Europe [and] visited the US, and I can assure you PE is one of the safest cities for sports people,” he said. “An incident like mine happens anywhere in the world.” An avid triathlete, Bangazi has trained and competed in sporting events across the globe. “Nelson Mandela Bay is still the best place to train, race and live a healthy lifestyle. “We can’t allow a few thugs to steal that from us,” he said.

Safety and security portfolio head John Best said he was shocked to hear Bangazi had been attacked in a residential area. “We absolutely condemn [the attack],” he said. Following a string of attacks on cyclists along Marine Drive, Victoria Drive and nearby areas – including on 2013 Ironman champion Frederick van Lierde in March last year and Czech Ironman competitor Miroslav Vrastil in April – security was beefed up along the Ironman route. Best said since then the metro police, along with the SAPS and private security companies, had been accompanying cyclists on their early morning rides on an hourly basis. Yesterday, metro officials, along with the SAPS and other stakeholders, held an emergency meeting to discuss adding areas – like Sixth Avenue and Heugh Road – to the routes where security is provided. “We need to catch the culprits and make an example of them,” Best said. Plans between the SAPS, metro police and safety and security directorate along with Ironman South Africa and Ironman International were already in place to ensure the safety of athletes training for the Ironman competition, he said. Bangazi said he was most upset about the fact that his favourite bicycle had been stolen. “It is an almost 10-year-old bike I bought from a friend for R8 000,” he said. “It is a Trek Madone 4.5 road bike. I loved it.” Ironman chief executive Keith Bowler said: “The safety and wellbeing of our athletes, volunteers, spectators and staff is our top priority. “We will continue to work in close cooperation with government agencies, including the [SAPS and metro police] to produce the most safe and secure events possible.” Police spokeswoman Captain Sandra Janse van Rensburg confirmed a complaint had been laid at the Walmer police station and police were investigating.