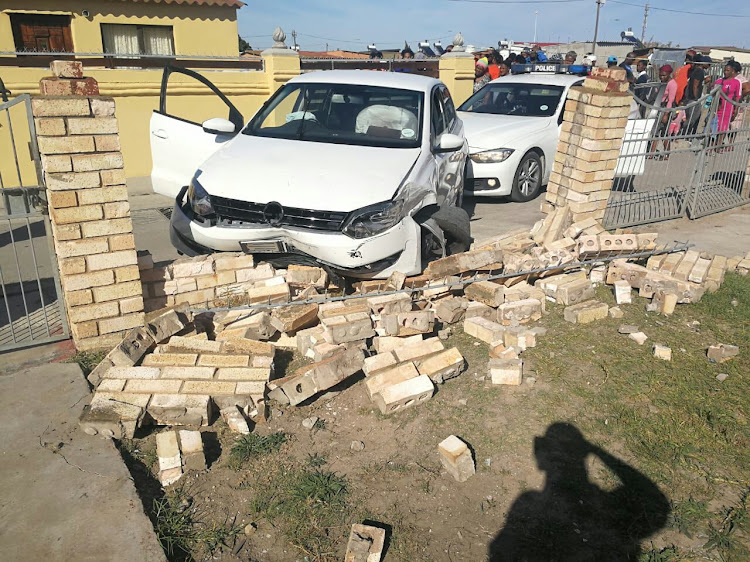 A 26-year-old suspected hijacker was arrested after crashing into the wall of a Port Elizabeth home following a high-speed police chase on Thursday.

According to police the chase took place following  a hijacking at 5am on Monday during which three men stole a VW polo in Belmont Terrance in Central.

Police spokesman Captain Andre Beetge said the hijacking happened on Monday while a woman was collecting a colleague for work.

“She stopped in her Polo and as her colleague was getting into the passenger seat of the car, three men approached them.

"One of the men yanked the woman from the driver’s seat while another two men attacked the passenger.

"A scuffled ensued and the three attackers jumped into the Polo and fled,” he said.

Beetge said that while no firearms were seen during the hijacking one of the suspects had shouted that the woman should be shot.

Beetge said after the men fled the police were alerted.

It wasn't until Thursday that the car was seen again.

Beetge said: “On Thursday, at about midday, the New Brighton police spotted the Polo speeding in Nobatana Street, Kwazakhele.

"It is believed that the car had false license plates. Attempts to pull the car over failed and the driver raced away.

"Back up was called for and the Flying Squad joined in the chase. Several intersections were skipped in the chase, which lasted about 15 minutes.

"Eventually, the suspect crashed the Polo into the perimeter wall of a house in Buyambo Street, Kwazakhele.”

During the chase police fired several shots at the Polo in an attempt to get the car stop.

“It is also alleged that police officials giving chase saw the driver of the Polo with a firearm in his hand that he pointed at them,” Beetge said.

“After crashing the driver attempted to flee but was caught moments later.” A hijacked Polo was driven into a wall by a suspect who was trying to flee from police
Image: Supplied

Beetge said two school satchels and cellphones were found in the Polo.

“It is suspected that this same group were involved with robberies of school children.

"Reports of robberies of children were received and the cases are under investigation."

Beetge said it was believed that the suspect was armed with a handgun but manged to throw it out of the window during the car chase.

The man will appear in the New Brighton Magistrate's Court on Monday for reckless driving, pointing a firearm at a police official, possession of a hijacked car and the suspected stolen school bags.

“Only within the week will the suspect be linked to the hijacking.

"Once that is done, he will reappear in the Port Elizabeth Magistrate's Court for the hijacking.”

Beetge said leads were being followed up and more arrests were expected.