Zuma warns that he will dish the 'dirt' on detractors 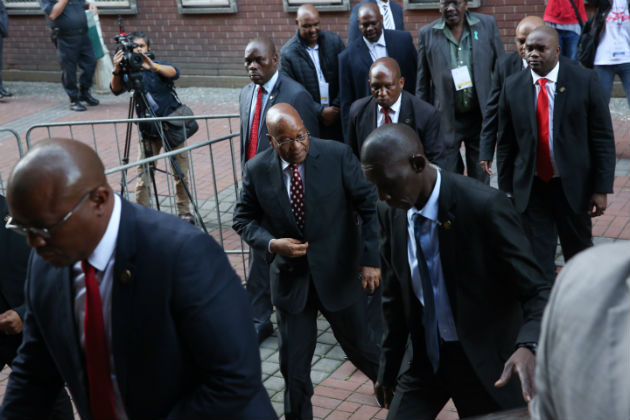 Former president Jacob Zuma has cautioned his detractors that he too has been collecting dirt on them.

Zuma was speaking to a crowd of his faithful supporters outside the Durban High Court on Friday. The elder statesman had appeared briefly on charges of fraud‚ money laundering and racketeering.

The matter was adjourned to July 27 and the matter will be heard in the Pietermaritzburg High Court. In the interim‚ the state will consider representations from Thales to have charges against the company withdrawn.

Outside the court‚ Zuma used the platform to fire a shot at those who sought to have him fall.

“I don’t want to be provoked. They speak about me in public and I am warning them in public. Tell them to stop messing with me‚” he said.

“In the past few years they have played with my name immensely. They said I was corrupt. I know some of them are corrupt and I am warning that I will start speaking about their business. It won’t be fun‚ someone who was once seen as a saint...people will find out a lot about them. They will get what’s coming for them.”

Zuma enjoys a strong support base in KwaZulu-Natal‚ including business forums and elements of the clergy. He was joined on stage by ousted North West Premier Supra Mahumapelo‚ former SABC boss Hlaudi Motsoeneng and former cabinet member Des van Rooyen.

On his looming trial‚ Zuma said the reasons for his prosecution were entirely political.

“I’m not afraid of anything and I will always be here. Judge Nicholson said this case can’t stand and that it’s just politics‚” he said.

Judge Chris Nicholson ruled in 2008 that former president Mbeki had interfered in a previous case against Zuma.

“They accused me of something I didn’t do. I was at home enjoying my pension money and I see someone on the TV saying Zuma...maybe the name rolls off the tongue nicely.”

“We are preparing questions for the judge. We are told there are a lot of witnesses. I am excited to see who they are and where they come from‚” he said.