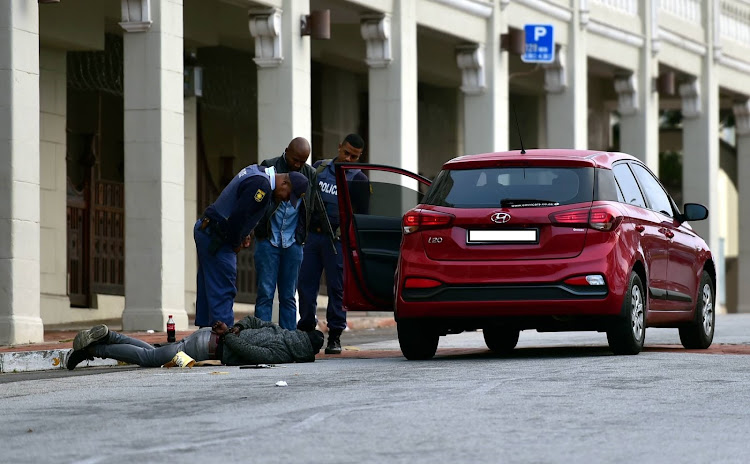 Police arrest one of the suspects in Central next to the Hyundai i20 which was stolen after a couple was hijacked in Matebeni Street, Kwamagxaki, on Tuesday morning
Image: Eugene Coetzee

Two men who allegedly hijacked a couple in Kwamagxaki on Tuesday morning, were arrested after police spotted the stolen vehicle in Central an hour later.

According to police, the Hyundai i20 was hijacked when the couple stopped in Matebeni Street just before 5am.

According to police spokesperson Captain André Beetge, the two men approached the car and held the couple at knifepoint while forcing them out of the car.

“They also stole the woman’s cellphone before speeding off in the car,” he said.

By 6am, police spotted the hijacked car in Athol Fugard Terrace opposite the King Edward Hotel and forced it to a stop.

“The police managed to box the car in with their vans. The two occupants were arrested inside the car,” Beetge said.

The men, aged 23 and 24, were detained and are due to appear in the Motherwell magistrate's court on Thursday for hijacking and possession of suspected stolen property.