Over the past two weeks, eight firearms have been stolen from armed security guards across the Bay 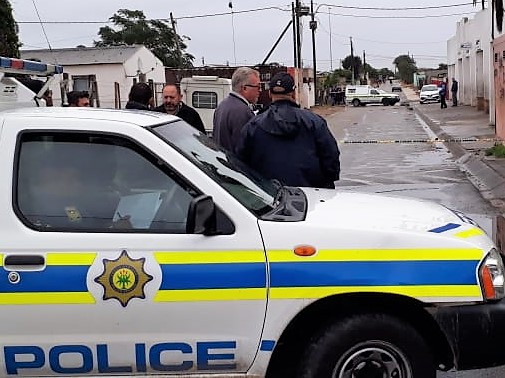 A gang armed with firearms and hammers ambushed the SBV armoured van and the escort vehicle in the Bay two weeks ago.
Image: supplied

A Port Elizabeth man was shot dead while escorting a furniture truck in New Brighton on Monday afternoon.

Eight firearms, including two rifles, have been stolen from security guards in Nelson Mandela Bay over the past two weeks.

In the latest robbery, Riaan Koll, 33, was shot in the head and his firearm was taken while he was escorting a Joshua Doore furniture truck in New Brighton at about midday.

This comes two days after an armed response guard was ambushed by two men outside a school in Motherwell on Saturday at 6pm.

Police have voiced concern over the spike in firearms stolen from security guards.

They said gangs were targeting security guards in a bid to get their hands on more firepower.

Six handguns and two rifles have been stolen in a series of robberies over the past two weeks.

Police spokesperson Captain Andre Beetge said Koll was driving the security car that was escorting the truck to Dora Street in New Brighton, where it was due to offload furniture.

Beetge said that when the car stopped in the street, Koll was accosted by eight men while sitting in his vehicle.

"He was shot in the head while seated in the car. His gun was the only thing stolen from him," Beetge said.

"While this was happening, six of the suspects forced the furniture truck driver and his assistant out of the vehicle at gunpoint.

"They were ordered to get into an open stormwater drain while the truck was driven off.

"The truck was found one street away with some of the furniture missing."

On Saturday, an armed response guard, who police are not naming for his safety, was confronted by two men after responding to an alarm activation at Cingani High School in Khabonqaba Street.

Beetge said the guard had checked the school premises and was walking back to his vehicle when the attackers pounced.

"He was closing the school gate to leave when two men held him at gunpoint and took his firearm. They then ran away," Beetge said.

"At this stage there is nothing to suggest that the alarm was activated to lure the guard there. It is thought this is more opportunistic."

In another attack on Friday last week, Gert Gouws, 47, was killed while escorting a furniture truck in Ngona Street in Zwide.

"As they stopped at their destination, three unknown men shot and killed Gouws and stole his gas pistol [a replica toy firearm]," Beetge said.

The truck driver, Henry van Zyl, 51, was shot in the stomach and later died in hospital.Nothing was taken from the truck.

On Wednesday last week, a team of G4S cash-in-transit security guards were robbed of a pistol and a rifle at a bar in the Coega Vulindlela Village on the outskirts of Wells Estate.

And on May 28, three 9mm firearms and a LM rifle were stolen from SBV cash-in-transit guards when they were ambushed outside a corner shop in Bafana Street and Johnson Road in Soweto-on-Sea.

Motherwell cluster commander Major-General Dawie Rabie said they were concerned over the recent spike in firearms being stolen on the streets.

"We are working hard to get firearms off the streets and prevent robberies. It is clear gangs are feeling the pressure as they are now targeting security companies, and anyone with a firearm," he said.

"We caution our members, security companies and all firearm owners to be vigilant."

In addition to security companies being targeted, a 46-year-old police sergeant attached to the Provincial Organised Crime Investigation Unit was robbed of his firearm during a hijacking outside his house in KwaNobuhle over the weekend.

The cases have all been handed over to the Motherwell cluster serious violent crime unit for investigation.