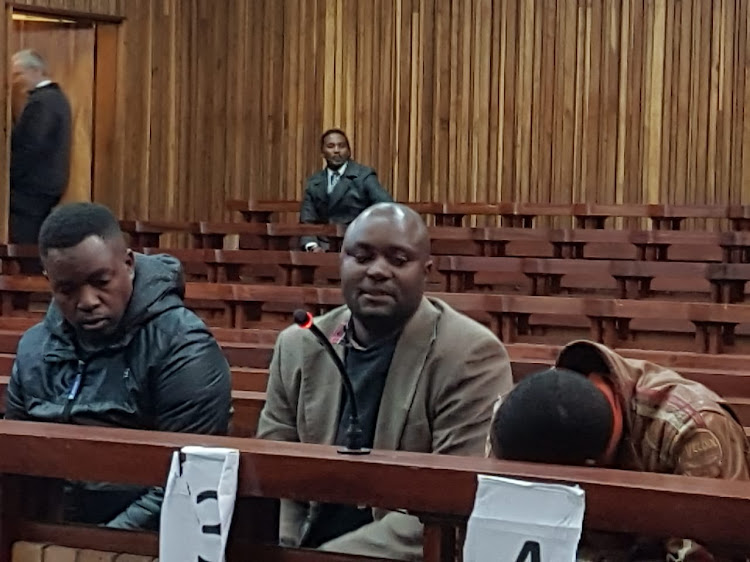 Three men pleaded not guilty on Tuesday to over 50 criminal charges relating to the poaching and harvesting of the horns of some 13 rhino over five years in the Eastern Cape.

Jabulani Ndlovu‚ 40‚ Forget Ndlovu‚ 37‚ and Sikhumbuzo Ndlovu‚ 38‚ are facing dozens of charges of theft‚ the hunting or killing of endangered rhinos without a permit‚ unlawful possession of the tranquiliser opioid agents M99 (also known as Etorfine) and Thiafentanil‚ and illegal possession of ammunition.

According to the indictment‚ the three men were caught red-handed in a chalet at Grahamstown’s Makana Resort in June 2016 with a 10.27kg freshly harvested rhino horn valued at R1-million‚ a bloody saw‚ a dart gun and M99 as well as cellphones and SIM cards.

The police raid on the resort happened shortly after a valuable white rhino bull was poached at nearby Bucklands Private Game Reserve.

A four-week-old baby rhino tried his best to save his mother‚ taking blows from a machete as he valiantly fronted up against marauding poachers.
News
3 years ago

Another rhino poached outside Port Alfred

TWO more rhinos have been poached on a luxury private reserve on the outskirts of Port Alfred. This marks the second poaching incident in which three ...
News
3 years ago

Another rhino has been poached, this time on a luxury private reserve near the Great Fish River on the outskirts of Port Alfred.
News
3 years ago

In the trial‚ the state says it will link the men to the killing of 12 other rhino from reserves spread across the province.

The men were initially also to face a further 15 charges relating to the killing of nine other rhino in the province during their current trial.

However‚ senior state advocate Buks Coetzee withdrew these charges against Forget. He indicated that Jabulani and Sikhumbuzo would still face the charges‚ but in a separate trial at a later date.

The trial kicked off with complex cellphone evidence in which expert Carmen van Tichelen from the rhino security unit began the complicated process of tying together cellphones and SIM cards allegedly belonging to the accused to particular rhino poaching crime scenes.

The trial continues on Tuesday afternoon.