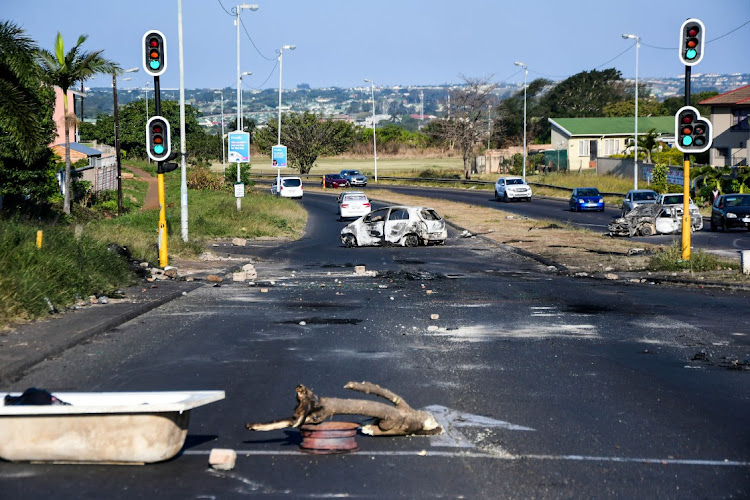 Burnt-out cars in Phoenix following violence that engulfed the community in July 2021 during the unrest that rocked KwaZulu-Natal and Gauteng. File photo.
Image: Darren Stewart/Gallo Images

Plans are underway for the erection of a memorial in Phoenix, which became an epicentre of violent clashes between black and Indian people during the July 2021 unrest in KwaZulu-Natal .

Premier Sihle Zikalala announced this at a social cohesion gala dinner on Thursday night which brought together pupils, teachers and community members.

He explained how the provincial government had set a “vision 2030” plan which seeks to use sport as a a tool to promote social tolerance and cohesion.

“Social cohesion will be promoted through sports and activities that engage both Inanda and Phoenix communities,” said Zikalala, explaining government’s plans to integrate the communities.

.“Sport can been used to build confidence, strength and capabilities.  Its also builds discipline,” said Zikalala.

The premier said dialogues led by committees would also be set up.

He said the violence had brought “embarrassment” to the province and left racial undertones. “

“The image of the province was left tarnished locally, nationally and globally. There was an erosion of social and moral fibre in the people of province and reversals of gains we had made.”

Despite the challenging period, provincial government had embarked on a series of engagements with communities across the province.

Among the sectors consulted are the taxi industry, business community, NGOs and the faith-based organisations as they sought to redress and return communities to a peaceful co-existence.

Zikalala singled out the joint peace community initiative established with the aim of ensuring negotiations and to pave the way for activities that marked co-existence of the Amaoti, Inanda and Phoenix communities.

He called on the public to become ambassadors of a non-racial society.

Also in attendance was former eThekwini speaker Logie Naidoo, who is also an ambassador in the social cohesion campaign.

“We have clear examples that tell us if we are united, we can eliminate poverty and illiteracy and can build a prosperous society,” said Zikalala.

Thursday’s activities commenced with a visit to the grave of the late ANC president Dr John Langalibalele Dube.

Mshengu said the aim of their stance was two-fold: to report to him about the programme and to commit that as the current generation, they would never allow anything that would betray his vision of non-racialism and inclusivity.

The youth then proceeded with games across different sporting codes and a debating contest. The department named the sport teams after  struggles stalwarts with links to the city.

“ We plan to roll this out throughout all our districts and embed it when we relaunch school sports in July,” said Mshengu.