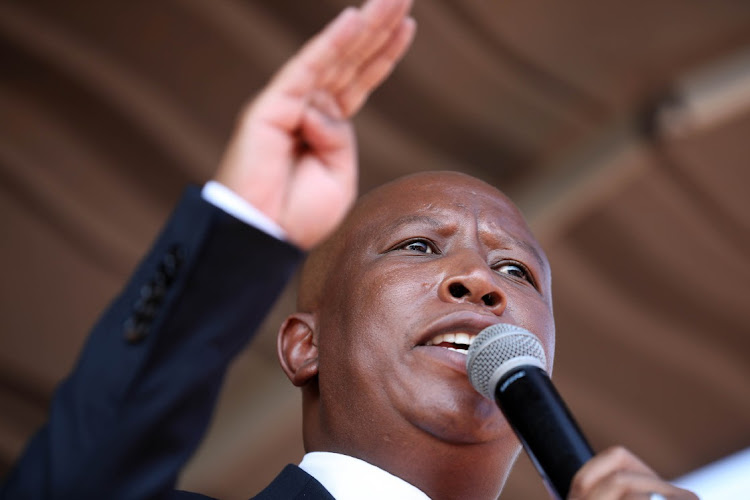 NOTHING HAS CHANGED: EFF leader Julius Malema used his Freedom Day address to attack President Cyril Ramaphosa and urge voters to get the ANC out
Image: ANTONIO MUCHAVE

He accused Ramaphosa, whom he called “Mr Nose”, of trying to privatise SOEs like Eskom and SAA, which he said was tantamount to giving them to a “white man”.

“They want to sell Eskom to a white man. Ramaphosa and Jamnandas [Pravin Gordhan] have collapsed SAA.”

He was speaking at the Saulsville Arena in Atteridgeville, Tshwane, where Malema also said senior citizens were to blame for the ANC staying in power for 27 years.

It was time to vote the ruling party out, he said.

“This loyalty to [former president] Nelson Mandela is costing them.

“We are not saying apartheid was better.

‘Freedom is not for the gays’

“Apartheid was not better, but it becomes more painful when you are oppressed by people who should understand your situation.

“The day we accept we don’t have true freedom is the day we must start fighting and that day is here —  we must fight,” he said to applause.

Malema also blamed Ramaphosa for the high levels of unemployment and poverty in SA, saying more people would still lose their jobs.

“Our president is stealing our assets in broad daylight.

“When we talk they say we must wear masks.

“We need to take them [ANC] out. The sooner we do that, the better,” he said.

Turning his attention to the October 27 municipal elections, Malema said the EFF would govern in Johannesburg, Tshwane and Ekurhuleni.

The three municipalities are expected to be highly contested, with parties vying for control of SA's economic hub when voters go to the polls.

Malema said they wanted the October 27 polls postponed because of Covid-19, saying campaigning for elections meant door-to-door and rallies.

However, the party was ready and would topple the ANC out of power in Johannesburg, Tshwane and Ekurhuleni even if the elections were today, he said.

All EFF branches must have been launched with members ready to hit the campaign trail by June 1, he said.

“If you’re an EFF supporter and you are not registered to vote, you are a coward, you are an mpimpi just like Ramaphosa,” he said.

He challenged party members not to elect uninspiring chairs “who can’t even give a speech”.

People wanting to be EFF councillors would have to produce a list of 500 people who pledged to vote for the party.

The red berets would then call those people to verify that the councillor candidate did speak to them, to guard against “crooks” lying just to be considered to represent the party.

This, Malema said, was to ensure that, when the elections came, the party would not start counting from zero “like chance-akers like [ActionSA leader Herman] Mashaba”.