Dinner with former US president Barack Obama does not come cheap 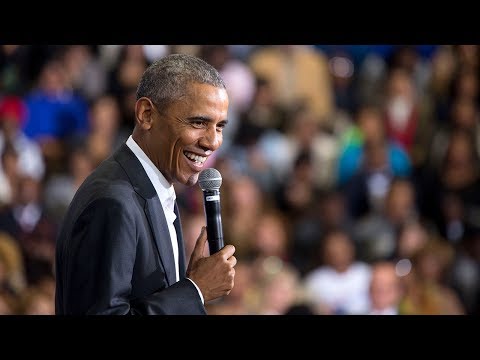 Dinner with former US president Barack Obama does not come cheap – just ask the people who attended a gala dinner after his Nelson Mandela lecture on Tuesday and forked out up to R50‚000 for the privilege.

The gala dinner was themed “night of a hundred words” and held in Nasrec‚ Johannesburg.

After Obama reminded South Africans that “yes‚ we can” at the annual Mandela lecture‚ he addressed a more elite room at the gala dinner.

The event was sponsored by Absa and the Nelson Mandela Foundation‚ with proceeds going towards funding the work of the foundation.

The gala‚ like the lecture‚ is an annual event meant to thank those involved and celebrate the lecture – which was delivered by Obama at the Wanderers Stadium on Tuesday to about 15‚000 people.

They performed a rendition of Johnny Clegg’s anti-apartheid song, Asimbonanga.

For starters‚ the guests enjoyed “Foraged Qunu – a tribute to a herd boy”.

This dish was local ashed goat’s cheese‚ textures of beetroot‚ charred corn and toasted hazelnuts delicately adorned with a mesclun of baby herbs‚ served with a bursting blood orange vinaigrette.

The guests could choose between Moretsele-style beef stew served with soft maize‚ grilled malay kingklip served on a scallion of mashed potato with a decadent coconut and turmeric latte cream, and a vegetarian pescatarian vegan option of king oyster mushrooms on spicy edamame mash with grilled asparagus and lightly pickled radish.

Former US president Barack Obama is delivering the 2018 Nelson Mandela Annual Lecture in Johannesburg from 2pm on Tuesday.
News
3 years ago