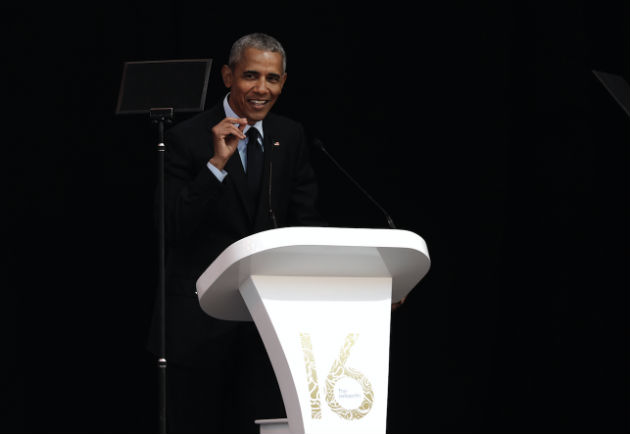 Former US president Barack Obama used a tribute to Nelson Mandela to warn that the world had plunged into strange and uncertain times and that the politics of fear and resentment were spreading, driven by leaders who scorned facts and told lies with an “utter loss of shame”.

He said there had been a reversal of the freedom and democracy that swept the globe when Mandela was freed from prison in 1990 and the Berlin Wall came crashing down in 1989.

The democratic and economic gains that were achieved were slowly being erased by authoritarian regimes that did not respect human rights and by global corporates that put profits before people.

“An entire generation has grown up in a world that has got steadily freer‚ wealthier‚ less violent and more tolerant during the course of their lives,” Obama told the crowd of about 15,000 who came to hear him speak at the Wanderers Stadium in Johannesburg on Tuesday.

“It should make us hopeful‚ but if we can’t deny the real strides our world has made since that moment when Madiba took steps out of confinement‚ we have to recognise ways in which the international order has fallen short of its promises.” He also blasted climate-change denial, racebased migration policies, unbridled capitalism and “strongman politics”.

“But we need to resist that cynicism.

“Countries that rely on nationalism‚ xenophobia and racial superiority – those countries find themselves consumed by civil war or external war.

“Technology cannot be put back in a bottle. We are stuck with the fact that we live closer together and populations are moving.

“The only way to address climate change‚ mass migration‚ pandemic disease is to develop more international cooperation‚ not less.”

Obama was welcomed by chants of “yes we can”, a reference to the slogan that swept him to the White House back in 2008, as he took to the podium to deliver the Nelson Mandela Annual Lecture‚ the centrepiece event of celebrations 100 years since Mandela’s birth.

“Given the strange and uncertain times we are in, where each day’s news cycles bring more head-spinning and disturbing headlines, I thought maybe it would be useful to step back for a moment and get some perspective,” he said.

“It is in part because of the failures of governments and powerful elites that we now see much of the world threatening to return to an older, more dangerous, more brutal way of doing business.”

On climate change, he said: “You have to believe in facts; without facts there is no basis for co-operation.

“I can’t find common ground if someone says climate change is just not happening when almost all the world’s scientists tell us it is.

“If you start [by] saying it is an elaborate hoax, where do we start?”

And he drew laughter from the crowd with the line: “Politics today seems to reject the very concept of objective truth – people just make stuff up.

“We see the utter loss of shame among political leaders who are caught in a lie and they just double down and lie some more.”

Tuesday’s speech came on the eve of Mandela Day, which is marked around the world every year on July 18.

Obama has made relatively few public appearances since leaving the White House in 2017, but he has often credited Mandela for being one of the great inspirations in his life.

He will also host a town hall event in Johannesburg on Wednesday for 200 young leaders selected from across Africa.