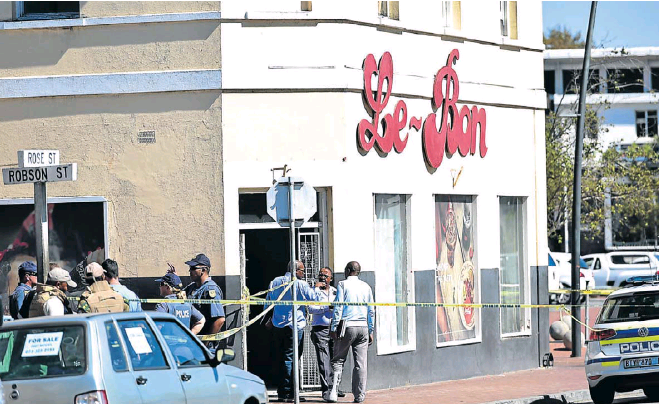 Vehicle-tracking information and his father’s gun linked a 24-year-old suspect to the bloody shootout in which a Port Elizabeth police officer was killed during an armed robbery in January.

The suspect is believed to have been part of a gang of five who ambushed eight employees of the Le Bon Bakery in Central on January 21.

The suspect purportedly managed to escape while four of his alleged accomplices were shot dead in the encounter with police who had responded to the robbery.

Flying squad officer Dwane Kemp, 31, also died when he was shot in the stomach.

The sole suspect’s name is known to Weekend Post, but magistrate Xolile Dlulisa ruled that it may not be used until he has ruled on the bail application on Wednesday.

He faces three charges, including murder, attempted murder and robbery.

The state opposed bail. Prosecutor Melani Hammett said the state had a strong case against the accused.

Hammett said the suspect’s father’s gun had been one of the firearms recovered on the scene.

She said the man, who lives in Algoa Park, had also used his father’s vehicle and that tracking information confirmed the car had been in the vicinity of the bakery during the date and time of the robbery.

Investigators had also confiscated clothing from the suspect’s home which he is believed to have worn on the day of the robbery.

Hammett said the state was awaiting additional evidence, including ballistic and DNA results, and cellphone analysis.

She said some of the other reasons bail was being opposed included that the accused could flee if released.

“The applicant in this case is not employed, he does not own a fixed property and is not married. This also is an indication that he would not hesitate to evade his trial as he has nothing binding him to Port Elizabeth,” she told the court.

“The witnesses in this matter are also afraid for their lives. If the applicant is released on bail he might influence or threaten them as he knows where they are employed.”

The accused’s lawyer, Zolile Ngeza, said his client intended to plead not guilty.

In his affidavit, the man said: “Prior to my arrest [on January 27], I was busy with an application to enrol for a bridging course to improve my grade 12 results.

“Due to the lack of employment in SA, it is important that I am granted bail in this matter.

“At St Albans [prison], I will not be able to pursue my education since I would be an awaiting-trial prisoner.

“I can afford an amount of R5,000 should bail be granted.

“The money will be out of my own savings from the odd jobs I did during December.”

Dlulisa postponed the matter until Wednesday to allow the defence to submit a supplementary affidavit in response to the state’s case.

A Port Elizabeth Flying Squad officer has been shot during a suspected armed robbery in Rose Street, Central.
News
3 years ago

‘Everything happened so fast’

“The other two Le Bon Bakery employees [had guns pointed at them] and were tied up with electrical cables.”
News
3 years ago

The policeman  who was wounded in Monday morning’s armed robbery at a Central bakery has died.
News
3 years ago

The four men who died after being involved in a bloody bakery robbery in which a police officer was also killed have been identified.
News
3 years ago

“I am glad you shot four, but I am not satisfied – I want the fifth one,” Cele said.
News
3 years ago