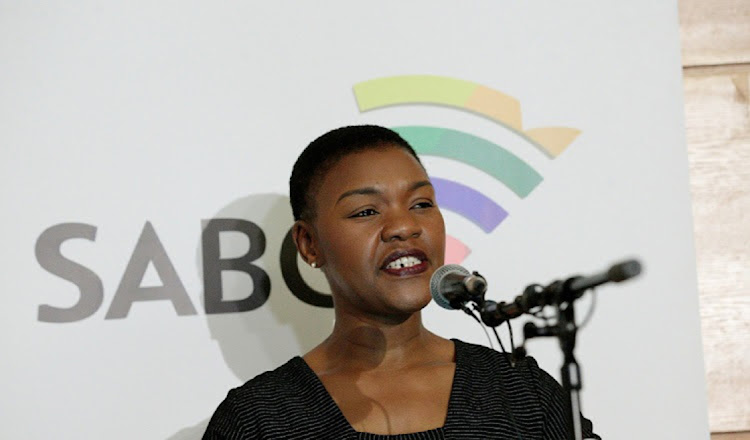 SABC head of news and current affairs Phathiswa Magopeni has been dismissed by the board of the public broadcaster.
Image: Veli Nhlapo

The firing of SABC editor-in-chief Phathiswa Magopeni is a backwards move which points to “clear political influence from the ANC”, the SA National Editors’ Forum (Sanef) said on Saturday.

Magopeni’s dismissal on Friday followed a disciplinary hearing which found her guilty of misconduct for failing to prevent the broadcast, airing and publication of an interdicted Special Assignment episode.

In a statement, Sanef said her firing happened before a panel adjudicated her grievances against SABC CEO Madoda Mxakwe and chairperson Bongumusa Makhathini.

Magopeni alleged they had interfered in the editorial independence of the SABC by forcing her to set up interviews with ANC president Cyril Ramaphosa during last year’s municipal elections campaign.

“Magopeni confidently contends that her sacking is directly linked to her refusal to take instructions from her bosses,” said Sanef.

“This pattern needs to be condemned because it makes a mockery of labour laws and associated processes. It also leads to a mistrust of our public institutions and denies the state broadcaster their constitutionally protected freedom of media.

“An environment where people can be fired following political interference by the ANC-influenced elections campaign leads to self-censorship and restrains journalists and media workers from the freedom they need to do their job.”

Disciplinary hearing chair Nazeer Cassim recommended that Magopeni be given a warning. But he said in heads of argument prepared on behalf of Magopeni it was asserted that “the charges brought against the employee are a farce and done so hastily”.

Cassim said the SABC board must give Magopeni the opportunity to distance herself from that phrase as it would be unjust to punish her for a submission and opinion of her attorney.

“If, however, Ms Magopeni makes common cause with the view of her attorney, then the board must in its discretion and decision-making power adopt a sanction which is consistent with that of a breakdown in the trust relationship between employer and employee.

“In short, it is now upon Ms Magopeni to decide her own future with the SABC,” Cassim said.

Sanef said Magopeni had been treated unfairly by the SABC because it continued to ignore her submissions about its “various nefarious intents, such as calling her to give reasons for mitigation against her dismissal, which she wrote back to, yet they ignored that and released an ill-informed statement regarding her dismissal”.

The statement said the SABC's reputation was under threat. “It’s unfortunate that the gains made in recent years since Magopeni assumed the leadership of the news team are now being taken backward by a management team that wants to see the news division led asunder with clear political influence from the ANC,” it said.

“Sanef remains committed to media freedom and believes that the news division of the SABC should continue pushing back against intentional ANC propagandas, in whatever shape or form they take.

“We will continue to support editors at a key institution such as the SABC, who continue to fight back against any undue editorial interference.”