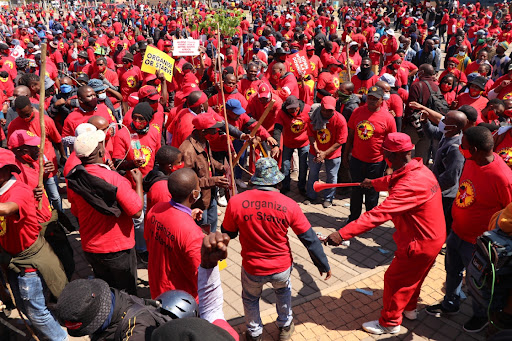 Thousands of Numsa members protesting outside the offices of the Metals and Engineering Industries Bargaining Council in the Johannesburg CBD. File image.
Image: SOLOMZI NDLOVU

SA's biggest metalworkers' union said on Friday its members were considering a new proposal to end a strike in the engineering sector, now in its fourth day.

The National Union of Metalworkers of South Africa (Numsa), with about 155,000 members organised in the sector, has been on strike to press for higher wages, an action that could hit supplies of parts to make new cars and accessories.

“If our members are satisfied with it, we may be able to settle the strike. In the meantime the strike will continue,” Numsa said in a statement.

The strike was launched after wage talks stalled and arbitration failed, with the union demanding an 8% across-the-board wage rise in the first year, and inflation plus 2% for the second and third years.

Industry body the Steel and Engineering Industries Federation of Southern Africa (Seifsa) had offered 4.4% for 2021, inflation plus 0.5% in 2022 and inflation plus 1% in the third year.

Lucio Trentini, CEO at Seifsa, which represents more than 1,000 large and small firms, said they met with Numsa officials earlier this week where a “framework proposal” was agreed.

He told Reuters on Friday that the proposal covered four pillars: wages, their duration, extension beyond those directly involved in negotiations and a special dispensation that would assist in achieving the third pillar.

Trentini did not provide details, saying it was confidential.

“If both sides can agree that is the best way to move forward, neither side will stand in the way of bringing the strike and lockout to an end,” Trentini said.

He added that Seifsa hoped to receive feedback at the weekend, maybe as late as Monday or Tuesday next week.