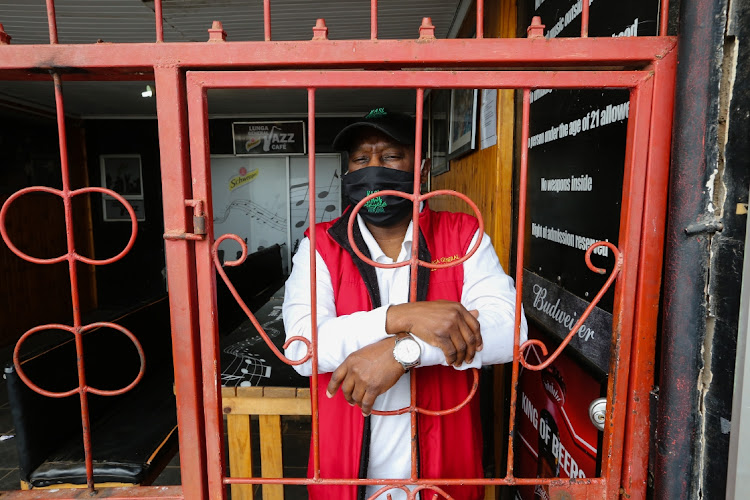 ANOTHER BLOW: Concerned Township Licensed Liquor Traders member Lunga Magxaka has had to close his business in Zwide due to the alcohol sales ban.
Image: WERNER HILLS

Nelson Mandela Bay township liquor traders have expressed their dismay with the reinstatement of the booze ban, which they say came without warning or consultation.

One of the three executives, Lunga Magxaka, owner of Lunga’s Jazz Club, said they had formed the organisation at start of lockdown because they did not feel township traders were adequately represented.

“Whenever government makes such decisions relating to the liquor industry, we do not get the proper consultation. Even the Liquor Board, the body we pay our rates to and answer to, have failed to alert us or even talk to us about what is going to happen,” Magxaka said.

He said their movement represented 60 tavern owners from in and around Nelson Mandela Bay.

Magxaka said even level 3 trading hours were problematic for township traders because their prime business was  on weekends.

“That was a crisis for us because most of the taverns close during the week and open during the weekend, when people are not working and just relaxing with their friends.

“So what happened during level 3 is that people were buying from your big liquor stores in malls and shopping centres.

“These are not struggling stores because many of these have been providing essential services since the lockdown started,” Magxaka said.

Mongameli Ngqokwe, owner of Joe’s Tavern, said the reinstated ban was going to affect the livelihoods of many people.

“We have cleaners and cashiers, they depend on this job to take care of their families.

“Imagine, this morning I had to turn my staff away because the ban was immediate and we do not even know for how long the ban is going to last. That makes us feel like we are not part of this country and that we are a useless part of society,” Ngqokwe said.

He said they had ensured compliance with the limited trading days and hours imposed when the initial ban was modified, as well as adherence to the safety protocols in formal retail and taverns.

“We hear the concerns about the hospital beds in the trauma and emergency wards being inundated, but that means there is a social problem among the consumers that needs to be addressed.

“But the punishment for that is hitting us hard as traders, while we are trying to help grow the economy and create jobs.”

Zuko Gqalane, owner of Oom Cola’s Tavern, said he was shocked when he heard the president’s announcement and was concerned about how he was going to make a living during the undefined period.

Meanwhile, the Eastern Cape Liquor Board has urged liquor traders to comply with the ban on sales.

The board said it had observed during levels 5 and 4 of the lockdown that due to the ban on liquor sales, people had resorted to selling home-brewed illicit beer, which had regrettably resulted in the  deaths of people in the Eastern Cape and nationally.

“We, therefore, wish to send a word of caution to people who might, during this time, resort to selling this kind of liquor, which has proven extremely risky to the health of our people.

“We also call on members of the public to refrain from consuming home-brewed beer mixed with methylated spirits as this may endanger them.”