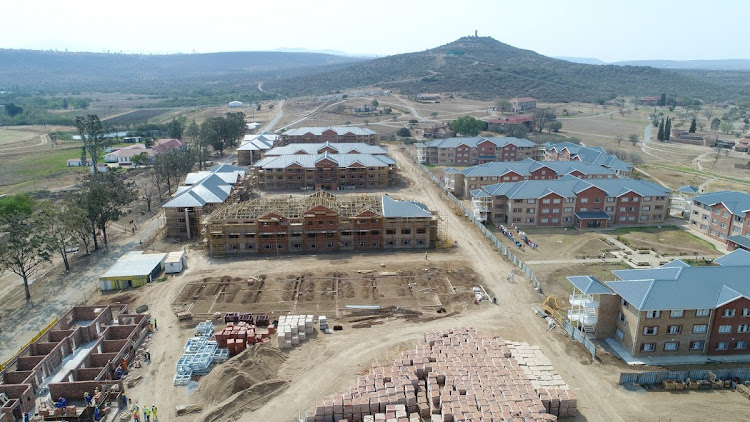 TAKING SHAPE: The new student housing development at the University of Fort Hare Alice campus is valued at R400m and, once completed, will accommodate more than 2,000 students
Image: SUPPLIED

Construction work has resumed on a large-scale student village development at the University of Fort Hare.

The R400m project, which is being developed by Stag African at the university’s Alice campus, had to be put on hold for two months because of the coronavirus lockdown.

Once completed, the development will accommodate a total of 2,047 students,

Stag African director Sean Kenealy said the project was the largest student accommodation development undertaken by a university in SA and was scheduled for completion in December.

“Its completion is critical to easing the housing crisis at the University of Fort Hare and giving students access to resources necessary for academic success,” Kenealy said.

He said lack of accommodation was one of the biggest challenges the university faced.

“Residences at its Alice campus were barely able to accommodate 50% of the student population.

“With the development project, the university aims to house 65% of students on campus, as well as provide a new student centre and a dedicated postgraduate accommodation block,” Kenealy said.

He said the Covid-19  lockdown has had a severe effect on SA’s construction industry, including material shortages, loss of income and the delay of key infrastructure projects such as student housing.

Kenealy believes the reopening of the sector will play a big role in reducing lockdown-related unemployment.

“The construction and property development industries are major economic contributors — they have the potential to employ large numbers of workers very quickly.”

“Physical distancing, the use of face masks, and continued education are among the measures being taken to prevent the spread of the virus, and ensure the safety of construction workers,” Cetywayo said.

Phase one of the project, completed in 2014, resulted in 610 beds being made available to the university.

A further 854 beds have been completed under phase two, which is funded by the department of higher education and training, the Development Bank of Southern Africa and the EU.

According to Stag African, completion of the project in December will bring the total number of beds handed over to 2,047, giving the university the highest ratio of students to beds in the country.