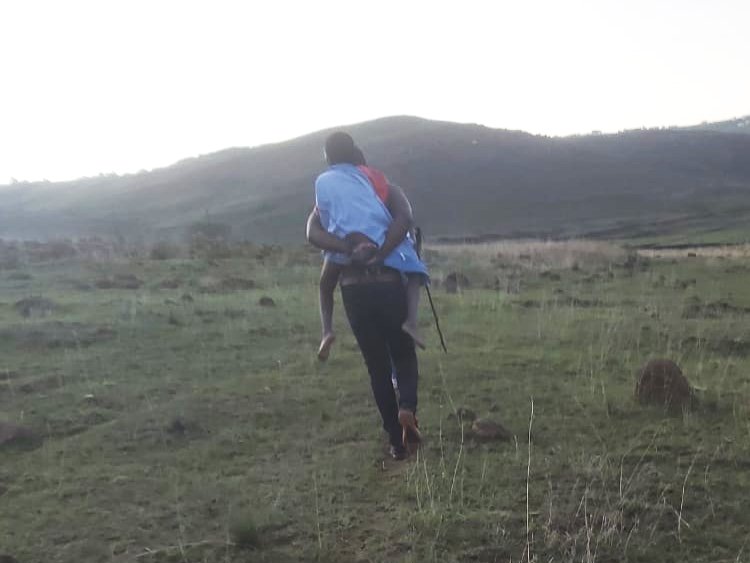 Khanide Nyikinya being carried to safety after the boy, aged six, was found following a five-day search.
Image: SUPPLIED

The six-year-old non-verbal autistic boy, Khanide Nyikinya, who went missing in Ntabankulu on Monday afternoon has been found alive.

The discovery of the boy ended a five-day search and rescue operation involving the SAPS's air wing, mounted division, K9 unit and members of the community.

He is now at a trauma unit at Hibiscus Private Hospital in Port Shepstone on the KwaZulu-Natal south coast, said his aunt, Nandipha Nyikinya.

Nyikinya said she found her dehydrated nephew lying on a clifftop overlooking a river on Friday evening.

Speaking from the hospital, she said: “Though the police said he looked all right, we decided to rush him to Mount Ayliff Hospital where he was put on a drip because he was dehydrated and his sugar levels were low. Because there are no paediatricians at the hospital  we took him to Hibiscus on Saturday.”

Nyikinya said Khanide's mother, Qhawekazi, 22, was part of the search party that found Khanide. “We first found his clothes, leading us to him sitting on a cliff.”

Khanide disappeared from his grandmother's Bhakubha home at 5pm on Monday.

“He was found sitting there without anything to eat or drink. They have taken him to hospital. I am so relieved.”