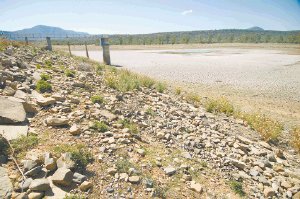 The parched Adelaide Dam has left farmers and residents in the area desperately in need of water
Image: Fredlin Adriaan

The DA tabled the notice of motion at their Taking Legislature to the People event in Komani on Tuesday.

Member of the provincial legislature Retief Odendaal, the party's constituency leader in the Eastern Cape Midlands, said the province was experiencing one of the most disastrous and debilitating droughts in its history, with more than four years of far below-average rainfall.

“This period has been characterised as a once-in-a-hundred-year drought and has placed many farmers in financial ruin.”

Reports emerged in mid-October that the premier had said he would declare the province a drought disaster area, but nothing had been officially communicated and such action was vital, he said.

“The declaration must be done as per the requirements set out in Section 35 of the Disaster Management Act, and it should be gazetted, and all government entities should be informed,” he said.

“Only once it has been gazetted can national government respond and can province make applications for relief funding and for procurement processes to be amended accordingly, for instance.”

Odendaal said the extended drought had led to significant job losses in the agriculture sector.

“Emerging farmers have been crippled by the severity of the drought.

“The inaction and lack of intervention by the provincial government to declare a provincial disaster will further cause harm not only to farmers but to our provincial economy.

“The motion also calls on the department to identify at least R50m which can be redirected as drought aid to both emerging and commercial farmers, rather than the paltry amount of R3,2m currently allocated.

“I have already identified more than R50m that could be cut from noncore expenditure including advertising, travel and catering.

“The motion also calls for an assessment of the impact of the drought disaster to be undertaken by the department of rural development and agrarian reform.

“This report should be tabled to the portfolio committee before the end of the 2019/2020 financial year, with findings and recommendations to be debated in the house and subsequently implemented.”