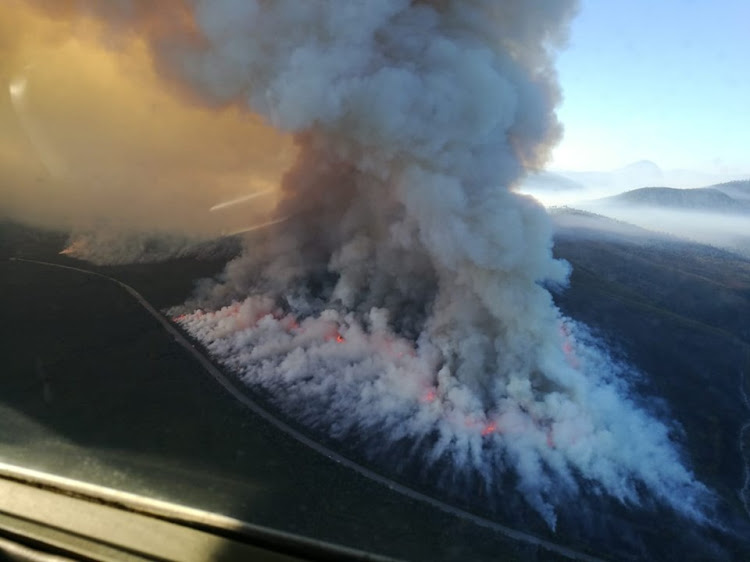 An aerial view of the controlled burn undertaken by SANParks in the Garden Route National Park above the N2 and about 5km west of the Tsitsikamma Toll Plaza.
Image: LEN DU PLESSIS

SANParks has completed a controlled burn of more than 20ha of fynbos east of Kurland in the Tsitsikamma as part of its programme to promote biodiversity and reduce the risk of wildfire damage.

Garden Route National Park manager Paddy Gordon said on Tuesday the area of 23.3ha was 5ha west of the Tsitsikamma Toll Plaza and about 8km east of Kurland.

“The aim of the burn was to limit the risk of wildfire north of the mountain catchment, which would be difficult and dangerous to access during wildfire conditions.”

The area comprised mostly Cape mountain fynbos and had not burnt in the last 19 years, he explained.

“A controlled burn like this one simulates what nature did before we started excluding veld fires because of the proximity of human communities. This exercise delivers multiple benefits.”

Fynbos untouched by fire for more than 20 years becomes moribund, losing species and no longer vigorously producing seeds, he said.

“Related to this, it loses its supportive pollinators like different insects and becomes very dry and flammable. The struggling plants leach nitrogen out the soil to help them survive and the soil loses quality.

“A controlled burn gets the landscape shipshape again. The ash returns nitrogen to the soil, seeds germinate and the freshly sprouting fynbos is much more resistant to dangerous wildfires.”

Fynbos needs to burn every 10 to 20 years to prevent it from transforming into thicket and the aim was to protect the integrity of the fynbos in line with SANParks’s commitment to champion biological diversity, he said.

“Controlled burns are an essential component of healthy ecology and the risks and extent of a wildfire are decreased through a controlled burn.”

The successful burn was conducted by SANParks in partnership with forestry company Mountain to Ocean. Other stakeholders were Working on Fire, Bitou Municipality’s traffic and fire departments, and the Southern Cape Fire Protection Association.

The Garden Route National Park is one of SANParks’s main assets, comprising about 165,000ha, of which one third is indigenous forest and two-thirds are fynbos. At least 7.1% of the mammals protected by the park are listed as endangered and 14% are vulnerable.

Stretching down the coast through the Tsitsikamma Forest from the Eastern Cape into the Western Cape, the park also lies in the heart of the fire zone which erupted twice in two years in 2017 and 2018.

Gordon said another advantage of a controlled burn was that all resources were on site and the most favourable weather conditions could be selected.

“Before lighting it, all fire breaks are in place and sufficient resources are at hand, including aerial support, ground firefighters and relevant equipment.

“It took the Tsitsikamma team one day to burn the area. In the case of a wildfire, more teams and more resources would have been needed to extinguish it.”

Although SANParks spent millions of rand annually clearing invasive alien plant species, the other purpose of an ecological or controlled burn was to reduce the volume of invasive alien eucalyptus, hakea and acacia plants. In removing these aliens the fire also significantly reduced the fuel load, he said.