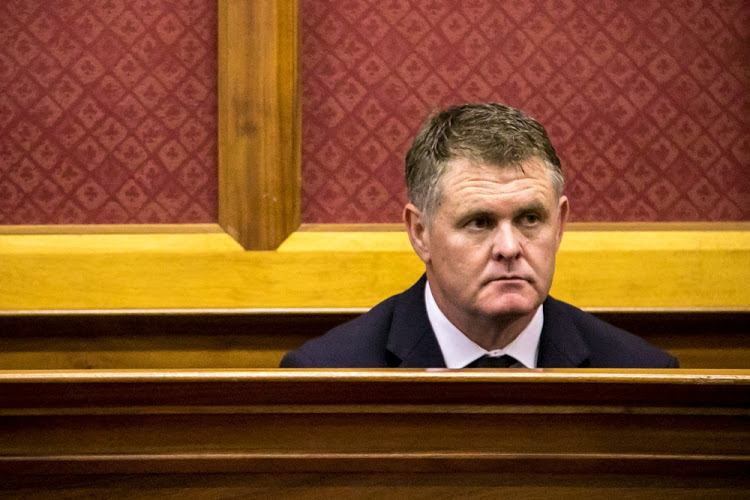 Property mogul Jason Rohde on the stand in the Cape Town High Court on May 29 2018
Image: Anthony Molyneaux

The Cape Town High Court has endured three days of gruelling testimony by Perumal‚ a seasoned expert with 24 years’ experience as a private forensic pathologist.

He was also hired by Oscar Pistorius as a defence witness and by the Farlam Commission to investigate the deaths of striking mine workers by police action during the Marikana massacre.

After quoting nearly every piece of medical literature available to assist his argument that Rohde was an innocent man‚ and that his wife committed suicide by hanging herself with an electric cord‚ he left the court with a caveat.

“My finding is consistent with ligature strangulation.... However on a second post-mortem examination alone‚ I cannot be certain about the cause of death‚” he said.

According to Perumal‚ no pathologist should be “adamant” about the cause of death.

This was a counter-attack aimed at the two state pathologists Dr Deirdre Abrahams and Dr Akmal Coetzee-Khan‚ who testified that Perumal was a “hired gun” and that he was misleading the court regarding certain of his findings.

He scoffed at the idea that he could be bought by anyone including the state‚ for whom he was an employee as the head of pathology in Mpumalanga‚ and he called such assertions ridiculous.

“I say respectively that Ms Abrahams seems to live in a closed and rather isolated little world‚ because she can’t see what the value of an independent autopsy is‚” he said.

He said that being called “by” the accused‚ does not mean he was called “for” him.

Perumal also stated: “I would not limit myself as being emphatic about the cause of death.”

Rohde is accused of murdering Susan at the Spier wine estate near Stellenbosch in the early hours of July 24 2016.

The couple were attending the Lew Geffen Sotheby’s International Realty annual conference‚ which Rohde hosted as the CEO of the company.

Susan had insisted on attending the event as she was suspicious of Rohde - this after she found out in February that year that he was having an affair with Cape Town real estate agent Jolene Alerskye.

Her suspicions were confirmed when she caught Rohde trying to send Alterskye a message from his phone.
A verbal and physical confrontation ensued.

The state relies heavily on its post-mortem report when it alleges that Rohde beat Susan up and dealt debilitating blows to her left chest‚ causing several rib fractures‚ before smothering her with a pillow and faking her suicidal hanging using the cord of a hair straightener.

Khan testified that her hyoid bone was fractured‚ an injury consistent with manual strangulation‚ and they found 400 ml of blood in her intestines which they said came from abrasions in her lungs caused by blunt force trauma to the chest.

But Perumal contested this saying that there was no fracture of the hyoid bone‚ and that Susan’s nose was accidentally impacted by Rohde‚ causing bleeding and that the blood from her nose ended up being swallowed.

He also said that the fractured ribs and teeth imprints on the inside of Susan’s mouth were artefacts from CPR procedures Rohde‚ and other witnesses who arrived on the scene‚ had conducted to try and resuscitate her.

The litany of articles which he quoted in detail‚ even to the frustration of the defence council‚ led by advocate Graham van der Spuy who was at times interrupted by Perumal so he could make further points‚ remain to be tested by state advocate Louis van Niekerk during cross examination which will only take place in two weeks’ time.

But Perumal was not finished with the state. He executed his final blow against Dr Coetzee-Khan by referring to the defence’s argument that Coetzee-Khan miscalculated the time of death by about 3 hours.

This magnitude of miscalculation‚ said Perumal referring to himself as Khan’s “senior”‚ if it were applied in medical practice‚ with for example the prescription of medicine to a live person‚ could have such adverse consequences that it could be deemed “negligent”.

Earlier on Thursday he testified that only about 2 kg of force was needed for a person to successfully hang themselves and that it could even be accomplished in a sitting position with the weight of the person’s head alone being enough to obstruct blood from flowing to the brain.

You smothered your wife with a pillow‚ prosecutor tells Jason Rohde

Jason Rohde smothered his wife with a pillow “to shut her up”‚ says state prosecutor Louis van Niekerk.
News
4 years ago

Jason Rohde is lying about the position of his wife’s body in the bathroom of their hotel room at Spier wine estate in Stellenbosch‚ the prosecutor ...
News
4 years ago

Jason Rohde admitted yesterday that he had a secret meeting with his mistress at the conference where his wife‚ Susan‚ died.
News
4 years ago

Murder accused Jason Rohde still dreams about the woman he is accused of killing.
News
4 years ago