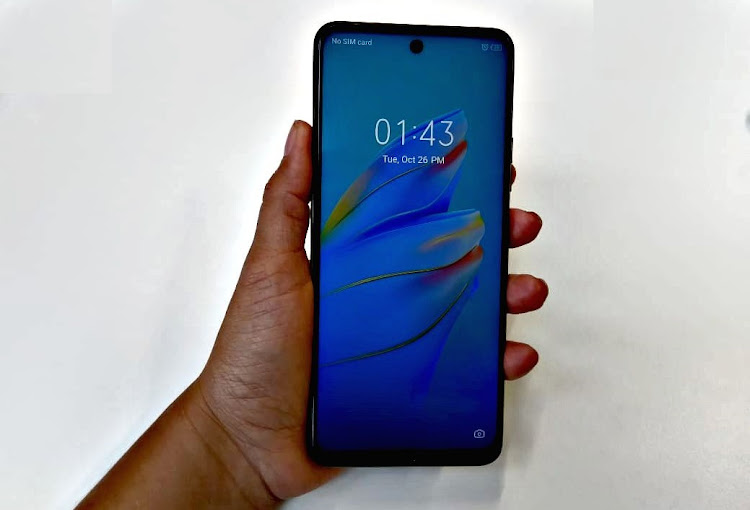 The Tecno is lauded as the world’s clearest selfie-camera smartphone thanks to its 16MP clear selfie camera.
Image: Supplied/Tecno

Emerging smartphone brand Tecno has recently released its latest addition to the smartphone arena — the Tecno Camon 17P. Tecno Mobile has toppled Samsung as the top-selling smartphone in Africa, according to Business Insider, and is well known for releasing low-cost, mid-range handsets that offer consumers more bang for their buck.

The Tecno Camon 17P retails for about R4,999 and is a budget-friendly option for those who want all the bells and whistles of a premium smartphone without the hefty price tag.

The Camon 17P has a premium aesthetic, with a back panel made of organic glass which, Tecno claims, makes it fingerprint and drop-resistant. The Tecno logo at the back is trumped by the impressive camera bump, boasting not one, but four cameras. Though not water resistant, the device does not flex under heavy pressure and, for the most part, its appearance is modern and elegant, and slightly more weighty than the average phone.

The Camon 17P’s quad-camera system provides a greater range of depth, which makes it a good option for those looking to dabble in mobile photography. The camera specs include a 64-megapixel (MP) main shooter with a  f/1.79 aperture. It also has a 2MP-macro lens and a 2MP depth sensor, both with f/2.4 apertures. The device also has a Quarter Video Graphics Array (QVGA) AI lens. The Tecno is lauded as the world’s clearest selfie-camera smartphone thanks to its 16MP clear selfie camera.

The Tecno Camon 17 is powered by Mediatek Helio G85 chip set and boasts a 6GB of RAM and 128GB of internal storage. It runs on Android OS v11.0 out of the box, with firmware capabilities that can be upgraded to the newest version of OS. One of the main features includes the excellent battery life and an impressive 6.8-inch IPS display. The display has a 1080x2460 pixel resolution and is one of the best features on the device.

I also enjoyed using the 17P’s wireless earbud headphones. The noise-cancelling earbuds features one-step pairing and come with a charging case that automatically recharges the buds, when not in use. Built-in microphones on both sides will allow you to make hands-free calls.

All in all, the Tecno Camon 17P is a nifty, affordable option for anyone looking for a high-end phone, without the premium price tag.

This was an independent review written by Christopher Williams of Diamond Networks.

This article was paid for by Tecno Mobile.

SPONSORED | To celebrate the SA launch of the Camon 17P, Tecno Mobile is giving away amazing prizes in its #TimeToStandOut selfie challenge
Lifestyle
1 month ago

The launch of the world’s clearest selfie-camera smartphone in South Africa is preceded by a insightful film looking at the evolution of the selfie ...
Lifestyle
1 month ago