Make your own ‘super sliders’ with our free Herald Cooking Masterclass

Register for our third online culinary event of 2021, being held on July 29 at 3pm 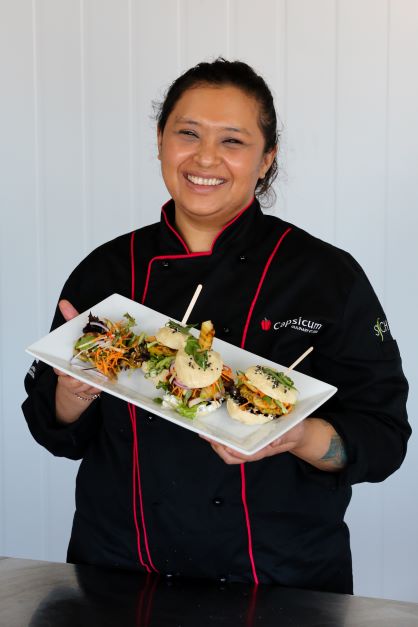 An assortment of sliders will be on the menu during the masterclass, presented online by Capsicum Culinary Studio Gqeberha’s professional chefs on Thursday July 29 at 3pm.

While the exact period during the early 20th century when sliders originated is still up for debate, these mini-burgers have been a part of the American culinary experience for a long time. Said to be called “sliders” because they slide right down in just one or two bites, in SA they have become hugely popular as restaurant or pub food, while they are great for lunch boxes and as an any-time snack or meal.

And in true masterclass fashion, the sliders to be made in the upcoming demonstration will be anything but ordinary, according to Capsicum Culinary Studio chef Nadia Pillay.

“We are adding a bit of a twist by making a bao, which is a steamed bun. These are traditionally filled before steaming them, but we will be making them plain and then adding four different fillings,” she said.

While chef Pillay will be making an Asian flavour-infused pork filling as well as a vegetarian filling, her co-presenter for the event, chef Donovan Miller, will be making both beef and crispy chicken fillings.

“The different fillings mean there will be something for everyone to enjoy. The sliders are cost-effective and making them can become a family activity everyone can get involved in,” said Pillay.

The Herald Cooking Masterclass series has been successfully hosted since 2019 — creating a fun, interactive cooking experience to broaden participants’ horizons in the kitchen.

Participants are encouraged to cook along while the chefs demonstrate the recipes from start to finish — all in under 60 minutes. The culinary series is sponsored by Checkers, Three Peaks Wine and Capsicum Culinary Studio, and is hosted online free of charge.

With restaurants not as accessible because of tighter lockdown restrictions, Checkers has a range of options to bring restaurant food to winter home menus.

“You don’t have to dine out to dine well. We offer everything to enjoy exquisite meals at home. And while our wide range of delicious, top-quality food products are already outstanding, it’s so easy to make them even better this winter. From our ready-to-cook ranges to our plant-based offerings, there's a ‘fake away’ solution for all,” said a Checkers spokesperson.

In a previous episode chef Donovan Miller and chef Nadia Pillay demonstrate how to cook one of their favourite health dishes.

Participants are encouraged to register early to allow enough time to buy all the required ingredients for the masterclass — which can all be found at Checkers.

Click here to register for the “Super Sliders Bao-style” Masterclass, hosted on Thursday July 29 at 3pm.

Twenty lucky participants stand a chance of winning a bottle of Three Peaks wine and branded chef’s apron. The Herald and Weekend Post are also giving away a 12-month complimentary digital subscription to another 20 lucky participants.

(Please note the wine hampers will be handed over to the winners only once alcohol restrictions are lifted.)

CHOCOLATE! Need we say more? In a previous episode Capsicum Culinary Studio chefs Donovan Miller and Nadia Pillay take us through a demonstration of one of their favourite indulgent winter chocolate dishes.