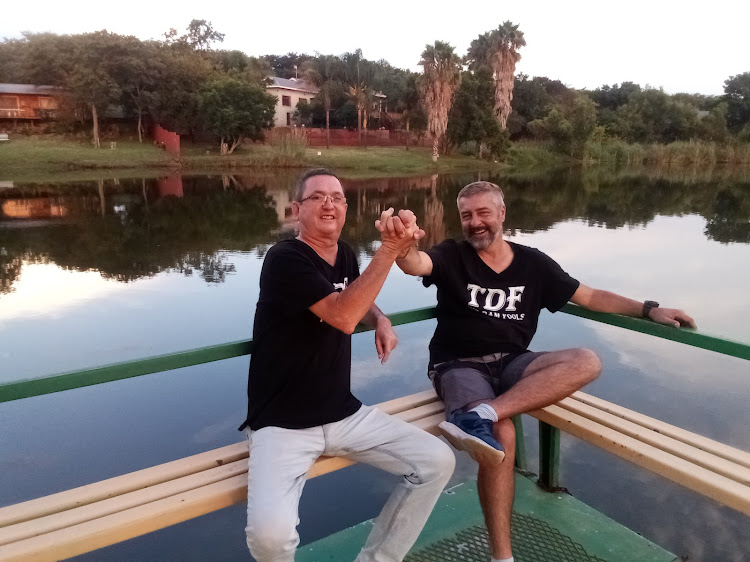 FOOLING AROUND: The ‘Two Dam Fools’ — Brett ‘Slukker’ Adkins, left, and Charl ‘Challa’ Barnard — aboard a riverboat on the Olifants River, near Loskop Dam in Limpopo
Image: MERRIN LE ROUX:

A new show has whipped the dryness out of the growing need for South Africans to become aware of water issues, serving up a cocktail of investigative craziness and adventure designed to celebrate our most precious natural resource.

Part offbeat travelogue, part water documentary, part fun in the sun, Two Dam Fools shines a light on the good the bad and the ugly in and around SA dams and rivers and does some fishing, braaiing and sipping of sundowners along the way.

“Subsequent feedback has seen the show expanding into a still unfolding series including all manner of inland camping, glamping, caravan and cabin sites where we still keep the focus on natural water features, be it rivers, waterfalls, lakes or dams.

“We explore our surroundings and see what there is to do and what’s on offer from easy hiking and more adventurous pursuits to the state of the ablutions, swimming safety, child care and security, state of the roads to get there and what sort of vehicle is needed.

“We conclude each episode with a short original song by Charl dedicated to that particular spot and my own take on our immediate environment.”

Adkins said the Bay’s plight with its dwindling water supply was one of the main motivations for the project.

“Our supply dams do not really lend themselves to getaways with fully-fledged resorts, but the idea is to remind viewers of the critical state of our water resources from the Bay to the furthest reaches of our land.”

He said one of their favourite spots so far was a corner of the Waterhoek Dam on the Mooi River in the KwaZulu-Natal Midlands.

“It’s a little bit of paradise in the middle of nowhere with canoeing, plentiful fishing and even a tiny coffee and breakfast nook right on its banks which the owners have built so that visitors to their camping resort can grab a bacon and egg roll before hitting the road home instead of having to travel to the nearest town.”

Adkins said because neither he nor Barnard  were regular campers, this aspect had proved challenging at times.

“But that's exactly what we want to show in Two Dam Fools.

“We have no idea what to do with at least 11 leftover parts of our tent which, when fully set up, looks nothing like the diagram in the tent bag.

“We burn our breakfast toast to a cinder, monkeys raid our cooler box and determined mozzies have scant regard for insect repellents.

“Snakes suddenly pop their heads out the water as we’re about to take a swim, mud-camouflaged crocodiles — thankfully mild-mannered — slither off the river bank just metres away.

“From almost capsizing canoes in dodgy waters to avoiding lethal flying fish hooks on the end of lines being cast by beginners, it has been hair-raising at times.

“We also didn’t anticipate how much background work — camera angles, sound levels and take after mistake — goes into the production.

“But we want to show it all and we’re having a huge amount of fun doing it.”

He said the show had been assisted by a circle of friends and acquaintances including Gqeberha-based media studies guru Francois du Plessis, Velk Productions and muso Marc Brunsdon and his son Adam, who helped with various aspects including producing the series to date and providing backing music.

“We have engaged with the TV production house industry with a view to a more formalised format for a conventional TV offering, but these processes have been slowed down immensely, like so many other ventures, by the Covid-19 pandemic.”

He said they got lost dozens of times traversing obscure rural roads for the show.

“But I expect Christopher Columbus may have pondered that getting lost actually leads to revelation.

“After two-and-a-half years of a world pandemic and restrictions on international travel, what this project has reinforced for us is the value of being a tourist on your own terrain.

“There is so much to discover right around the corner.

“I doubt if I will ever get on a plane for an overseas destination again.”