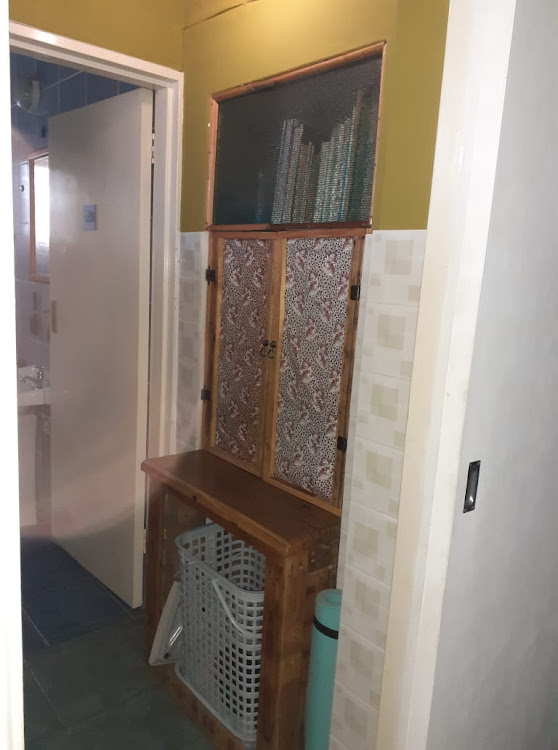 NO MORE DOORWAY: Wasted space outside the bathroom has been put to good use
Image: supplied

There are lots of different reasons why you might consider closing up a doorway, but in our case, it was to gain more useable space in our kitchen.

Our bathroom and kitchen are situated beside each other leading off the lounge, and each has an entrance leading to them from the lounge.

There’s also a door between them on the lounge end. While it’s always been convenient to slip between the two without going through the lounge, this doorway also has a price to pay — in the form of space!

The corner of the kitchen that has the adjoining doorway in it meant that we couldn’t put anything too close to that doorway, or it would be obstructed.

Also, simply placing one of the refrigerators up to the open space also didn’t feel right.

I finally decided to close the doorway off in 2018 — but instead of bricking it up permanently, I opted to construct a wooden partition in the opening instead.

That way, should we change our minds sometime in the future, it would simply be a matter of removing the partition and patching over the screw holes with filler.

At any rate, the resulting product is so useful and pleasing to our eyes that’s unlikely!

All the wood we used was recovered wood that used to be part of one of the outside buildings — ceiling and wall boards — which turned out lovely once all the decades of paint had been removed.

I’m sure pallet wood would also do quite nicely, and it’s easy on the pocket.

I started by building the box-shelf you see in the photo — across the top portion of the opening, with the bottom shelf resting on the top of the wall tiles.

Then I set to work on the partition itself. I wanted the panelling to fit as flush to the kitchen wall surface — as level with the tiles — as possible, so I measured the thickness of the boards and then mounted one 2cm x 2cm square strip down each side of the opening from under the shelf to the floor, placing them up to the thickness of the boards away from the edge of the opening.

That way, when I fitted the boards, they should be flush with the surface of the tiles along the kitchen wall.

I mounted the strips using wall plugs and screws, opting to drill the holes for the wallplugs in the gaps between the tiles.

Once that was done, I measured the width of the opening in three places to ensure I had a consistent measurement to work with — I did — and then cut boards to make the panelling.

These were all fitted with ordinary self-tapping chipboard screws, four per board, that is, two per side. When done, I applied varnish.

Once dry, I measured the dimensions of the opening in the box-shelf and had a piece of frosted glass cut for it, and fitted it using a few lengths of quarter-round wood strips.

The box-shelf makes a nice spot to keep cookery and herb books  as well as a few interesting odds and ends. Hooks underneath it are where we hang our coffee mugs!

The kitchen side done, I turned my attention to the other side of the partition.

One thing we didn’t have was a nice handy spot to store spare hygiene items like tubes of toothpaste, washing powder, toilet cleaner, soap cakes, razor blades and the like, so this was my chance to make such a cupboard!

I fitted a few shelves on the top side of the partition underneath the enclosed glazed back end of the box-shelf, and then added a table top I made from off-cut bits of floor joist wood and legs from pallet wood.

I wanted to reserve the space underneath the table top for our washing basket and so measured and worked accordingly.

I made two doors for the little storage cupboard using 2cm x 2cm wood strips for the frames, and bits of off-cut animal print material stapled across the back sides.

Hinges and handles came from a nearby hardware store at around R25 each. Again, I applied varnish to that side as well, and voila!

Rather than having simply lost a doorway, we’ve gained so much useful space and amenities we didn’t have before!