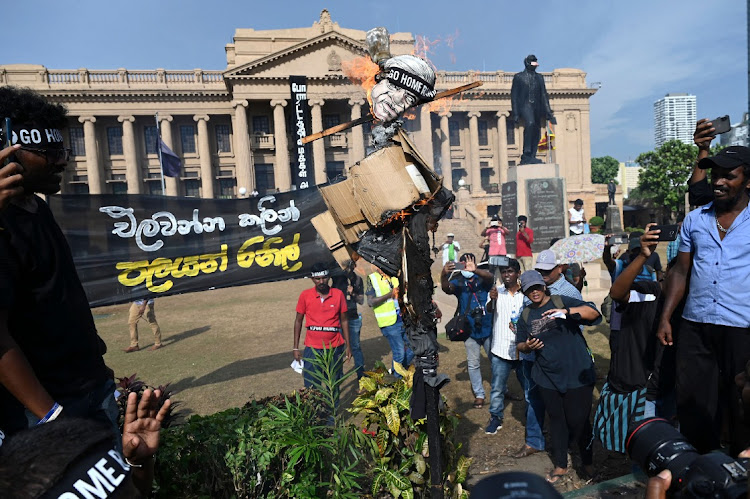 Demonstrators burn an effigy of interim Sri Lankan President Ranil Wickremesinghe during a protest in front of Presidential Secretariat in Colombo on July 19, 2022.
Image: ARUN SANKAR/AFP via Getty Images

Sri Lankan lawmakers voted in parliament on Wednesday to choose the next president from three contenders amid tight security, hoping the new leader would pull the island out of a crippling economic and political crisis.

A win for acting President Ranil Wickremesinghe, one of the main two contenders but opposed by many ordinary Sri Lankans, could lead to more demonstrations by people furious with the ruling elite after months of severe shortages of fuel, food and medicines, several protesters have said.

The other main candidate, ruling party lawmaker Dullas Alahapperuma, is more acceptable to the protesters and the opposition but does not have any top-level governance experience in a country with barely any dollars for imports and desperately in need of an IMF bailout.

“We are here to send our good vibes to the lawmakers so that they can do the right thing, elect the right president so that we can come out of this problem,” said Namal Jayaweera, one of several dozen people sitting on the steps of the presidential secretariat, awaiting the result.

Hundreds of police, paramilitary and military troops were deployed around the parliament building, about 13km (8 miles) away, and an approach road had at least three barricades. Security personnel in speed boats patrolled a lake around the building, and military jeeps and armoured vehicles stood parked within the perimeter.

Protesters occupied the presidential secretariat earlier this month along with the official president's residence, forcing the then incumbent Gotabaya Rajapaksa to flee the country.

Many protesters see Wickremesinghe as an ally of the Rajapaksa family, and his private house and office were also stormed by people demanding his ouster.

Wickremesinghe, a six-time prime minister, became acting president last week after Rajapaksa fled on a military plane to the Maldives and then took a commercial flight to Singapore.

Two of Rajapaksa's brothers, including former prime minister and president Mahinda Rajapaksa, as well as a nephew were in attendance as the 225-member parliament gathered for the vote. The process is expected to take hours before a winner is declared.

There is a third candidate in the contest — Anura Kumara Dissanayaka, the leader of the leftist Janatha Vimukti Peramuna party. But his party commands only three seats in the 225-member parliament and he has no realistic chance of winning.

It was not immediately clear how much support 73-year-old Wickremesinghe and 63-year-old Alahapperuma have in parliament.

Wickremesinghe is backed by a section of the ruling party that had a total of 145 seats as of the last parliamentary election in 2020. Alahapperuma has the support of the other section as well as the main opposition party that won 54 seats last time round. Several small parties have promised to support him as well.

Latest numbers are not clear because some lawmakers have become independents.

“Earlier Ranil Wickremesinghe was the front-runner but now the outcome is much more uncertain,” said political scientist Jayadeva Uyangoda.

“The balance of parliament power has shifted away from him. The outcome is dependent on how much control the Rajapaksas have ... over their party members.”

Sri Lanka's parliament in 1993 unanimously chose D.B. Wijetunga to finish the tenure of assassinated President Ranasinghe Premadasa. This time three candidates are in the fray to complete Rajapaksa's term, scheduled to end in 2024.

“It will be marked as a new experience in the parliamentary history of this country,” a statement from the communication chief of parliament said, laying out the procedure.

A candidate receiving more than one-third of the valid votes cast will be declared elected. If no candidate reaches the mark, the one with the lowest number of votes will be eliminated from the competition and preferences of lawmakers taken into account to eventually arrive at a winner.