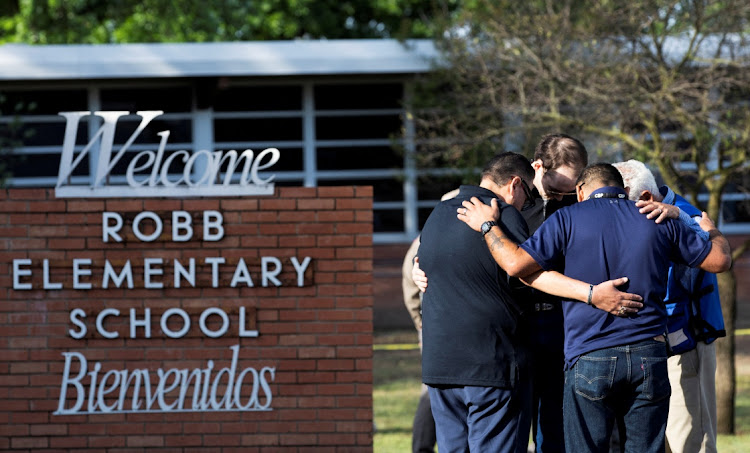 People gather at Robb Elementary School, the scene of a mass shooting in Uvalde, Texas, US, May 25, 2022.
Image: REUTERS/Nuri Vallbona

The Texas gunman who murdered 19 children and two teachers posted on Facebook that he was going to shoot up an elementary school about 15 minutes before his rampage, Governor Greg Abbott said on Wednesday, as harrowing details about the attack continued to emerge.

The gunman, identified as 18-year-old Salvador Ramos, also posted a message saying he was going to shoot his grandmother, as well as another one confirming that he had done so, Abbott said. His grandmother, whom Ramos shot in the face shortly before attacking the school, survived and called police.

Ramos fled the home he shared with his grandparents and crashed his car near Robb Elementary School in Uvalde, Texas. He entered the school through a backdoor carrying an assault-style rifle and wearing tactical gear.

He barricaded himself in a fourth-grade classroom, authorities said, and killed students and teachers before he was fatally shot by a U.S. Border Patrol officer, Abbott said. A further 17 people suffered non-life-threatening injuries.

The Facebook posts were the only advance warning of the rampage, Abbott said, adding that Ramos did not appear to have any criminal record or history of mental health problems.

Ramos purchased two rifles and hundreds of rounds of ammunition days before the attack, several news outlets reported, citing a state senator who had been briefed by law enforcement.

The attack, which came 10 days after an avowed white supremacist shot 13 people at a supermarket in a mostly Black neighborhood of Buffalo, has reignited a national debate over U.S. gun laws.

"As a nation, we have to ask when in God's name we're going to stand up to the gun lobby," he said, his voice rising.

But new legislation appeared unlikely to pass in Washington. Virtually all Republicans in Congress oppose new gun restrictions, citing the U.S. Constitution's guarantee of a right to bear arms, and there was no sign the massacre would alter that position.

White House officials were planning a trip to Texas for Biden, a senior administration official said.