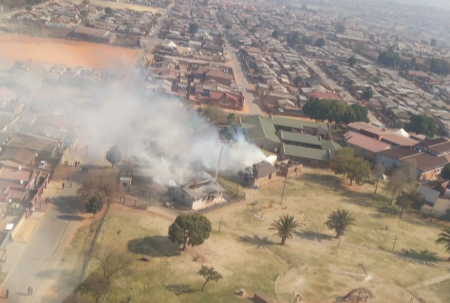 A government building was torched by Thembisa protesters on Monday.
Image: Crime Air Network via Twitter

Thembisa residents protesting against electricity cut-offs for defaulting customers and “high municipal rates” have damaged an electricity substation, sparking outrage from other residents who fear power outages will be the consequence.

A government building has also been torched, according to social media posts.

Some roads in the area have been blocked off with rocks since late Sunday night by protesters. A community engagement was called in Thembisa by officials from the Ekurhuleni metro on Friday, but protesters said they want the metro's mayor to address them.

Ekurhuleni metro police spokesperson Kelebogile Thepa confirmed one protester was shot dead by an officer during the protest action.

The Independent Police Investigating Directorate is probing the circumstances.

You adding more problems to the current situation 🙄🙄 #TembisaShutdown pic.twitter.com/c8uncUduQs

Yes earlier this year or late last year the mayor replaced a transformer at Mmangweni which serves the whole Tembisa now they have burnt a substation at kgatlamping in the name of tarrif hikes imagine.

The situation is tense in Tembisa as the community protests pic.twitter.com/RBNnM0L3QZ