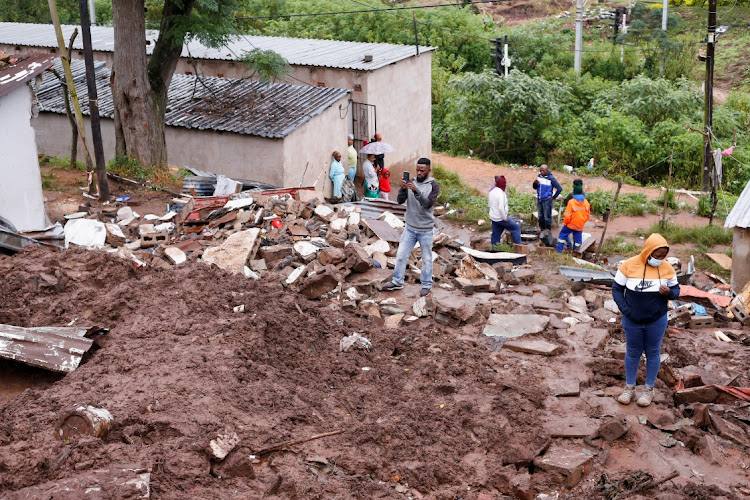 People stand amid the remains of a building destroyed by flooding at the KwaNdengezi Station, near Durban, on April 16 2022.
Image: Reuters/Rogan Ward

More than 13,500 households have been seriously affected by the KwaZulu-Natal floods, human settlements minister Mmamoloko Kubayi said on Saturday.

“Mud houses, settlements located close to rivers and waterways have been severely affected and some houses and shelters have been swept away. Informal settlements were among the most affected.”

Kubayi said she had visited some of the affected families and “could not imagine” what they were going through.

“All I could think about was, what we as government can do as quickly as possible to bring some relief to the people of KwaZulu-Natal,” she said.

“The least we can do as a government is to ensure that we move very quickly to bring tangible solutions to affected families.

“We cannot recover lost lives but we can ensure that the survivors of these devastating floods are given some relief, through the provision of shelter and other social amenities.

“A day or week that goes by with people living in halls or without shelter is a call to all of us. Our conscience not to allow us to go to sleep without finding solutions.”

Kubayi said human settlement grants would be reprioritised to deal with the disaster.

“To put this into effect, revised cash flows were submitted to National Treasury on April 14 and a positive response was received,” said Kubayi.

“The payments will be processed next week. This will allow an amount of R1bn to flow to the province from the national department of human settlements.”

Kubayi said eThekwini can tap into  R539m from the urban settlements grant and R143m that was recently allocated to the informal settlements upgrading grant.

“Consultation is under way to request that these amounts be reprioritised to address the current disaster. However, these can only be used if the metro has not committed them in terms of any statutory or contractual obligation.”

Kubayi said the Community Schemes Ombud Service will contribute R30m “of the balance of the retained surplus for the 2020/2021 financial year subject to approval by National Treasury”.

Some R100m from the residential rent relief grant will also be allocated to the disaster, subject to necessary approval.

“An amount of R150m from the debt relief programme will be allocated to the disaster relief endeavours, subject to prerequisite approval process,” she said.

“The NHFC (National Housing Finance Co-operation) will also contribute an additional R2m from their corporate social investment. This means that in total, the NHFC will contribute R152m. This entity will also avail its project management capacity for the rebuilding of houses in KZN.”

Kubayi said her department will do all in its power to ensure resources reach the intended recipients.

“In this regard, the auditor-general’s office will work closely with us to keep a close eye on the utilisation of the resources,” she said.

“The department of monitoring and evaluation will be working closely with us to monitor both financial and the non-financial performance of this intervention. You recall that due to the last year's July riots, there has been a shortage of building material supplies to the province so that we can be able to meet the demand for housing in the short term.

“We call on all property developers and contractors that are going to assist us to work swiftly and deliver quality products so that the people who have been affected can regain their dignity as quickly as possible.”