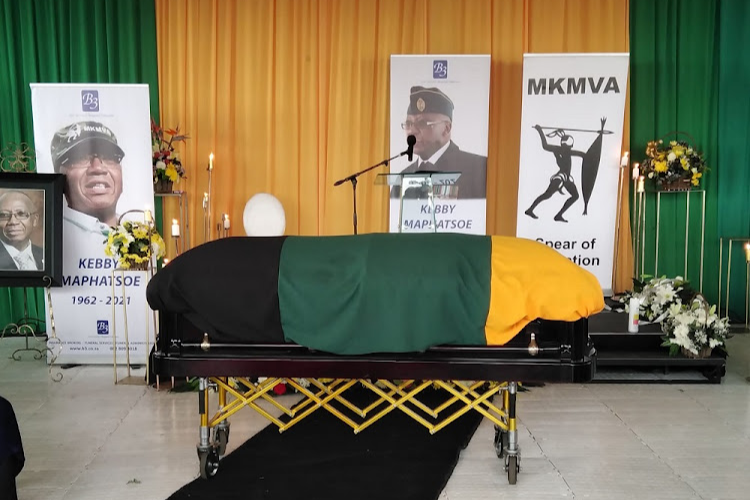 Police said they are investigating incidents at the funeral of Kebby Maphatsoe on Sunday.
Image: Veli Nhlapo

The police are investigating cases of contravening the Firearms Control Act after shots were fired in the air on Sunday during the funeral of Kebby Maphatsoe at West Park Cemetery in Johannesburg.

Maphatsoe was president of the now-disbanded Umkhonto we Sizwe Military Veterans Association (MKMVA).

Police spokesperson Brig Vish Naidoo confirmed to TimesLIVE that the police were investigating the cases, saying more charges could be added depending on how the investigation progresses.

He said the police were also investigating the possible flouting of Disaster Management Act regulations at the funeral.

“There are two things we picked up: we are looking at the timeframe of the funeral and that the number of people who attended the funeral exceeded what is allowed under the current regulations. We’ve opened cases and we are investigating,” he said.

It is alleged a bullet smashed a window in a home close to the cemetery in Montgomery Park.

The gunfire salute continues at #KebbyMaphatsoe funeral. Semi-automatics, glocks and pistols. Could there be a few of Prinsloo's Z88s being fired here as well? Hard to tell. pic.twitter.com/WnGGxp1VFu

Ward councillor in the area David Hensman told TimesLIVE he was aware of the incident but said he didn’t have full details.

He said the discharging of firearms at cemeteries was a common feature at funerals of struggle stalwarts and gangsters. He said he wished the police could be more proactive when there are funerals where they know there is a high possibility of firearms being discharged.

Maphatsoe served as deputy minister of defence from 2014 to 2019 and was a staunch supporter of former president Jacob Zuma.