Man accused of gang killing says he was a target 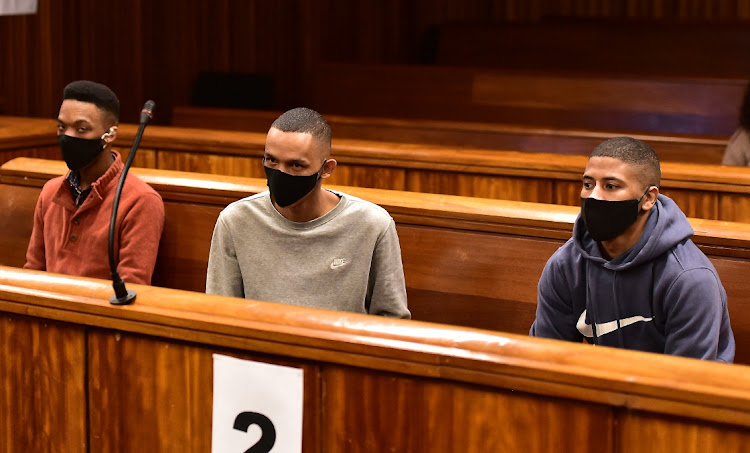 One of three men accused of killing two alleged gang rivals and wounding six others told the Port Elizabeth High Court on Tuesday that he was the target of a shooting and had nothing to do with the murders.

Danielson Darries, 25, testified  in his own defence.

He said he had left his house in Pienaar Street, Helenvale on the morning of September 23 2017 and went to Bongo Road to smoke Okapipe with friends.

He was called by his sister’s boyfriend who told him rumours were doing the rounds that he had shot someone outside his home.

Darries claimed he later went to his uncle’s shop in Link Road when he heard gunshots being fired.

“I was on my way home [in Link Road] when I saw a red bakkie drive past me at a speed.

“When I ran closer to the bakkie one of the men sitting at the back fired two shots in my direction,” Darries said.

Darries said when he reached his house in Pienaar Street he looked up the road and saw a group of people huddled around something at the corner of Bongo Road and Pienaar Street.

According to Darries, when he went to see what was happening the police arrived and cordoned off the area.

He then went back to Bongo Road to continue smoking Okapipe.

Darries denied any involvement in the killing of Linton Tobie and Justin Kariem Valentine who were shot and killed within hours of each other on September 23 2017.

He further denied knowing or associating with his co-accused Euwen Bardness and Furdo April, both 25.

He claimed he was not part of a gang although he admitted that during 2015 and 2016 he was part of the BR gang.

At the start of their trial in November last year, all three pleaded not guilty to two counts of murder, six counts of attempted murder and one charge each for the illegal possession of a firearm and ammunition.

According to the state, it is alleged that Darries, Bardness and April were standing on the side of the road in Helenvale when a red VW Caddy bakkie stopped on the corner of Pot and Pienaar streets.

As the bakkie stopped, the three men allegedly opened fire on it and its occupants striking Tobie in the back.

Tobie died later after being admitted to Livingstone Hospital.

In a second incident on the same day, it is alleged Valentine was walking down Pienaar Street with another man when Darries, Bardness and April approached and opened fire.

Valentine was shot in the chest and was declared dead shortly afterwards.

According to the state, all three men belonged to the New Kids gang while some of their victims were members of the rival Upstand Dogs gang.