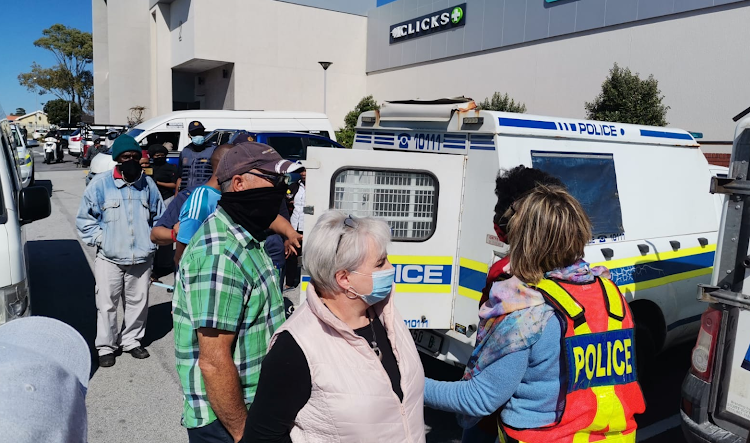 VOLATILE REACTION: Three people were removed from Walmer Park when a woman pulled out a gun following an argument at the entrance to the Clicks store. No arrests were made
Image: EUGENE COETZEE

Police removed three people from the Walmer Park shopping centre on Tuesday morning following an argument that saw a 52-year-old woman pull out a gun and point it at protestors outside Clicks.

The protests came after the EFF embarked on a nationwide campaign to shut the retailer’s outlets as anger mounted over a racially charged advertisement the company had placed on its website.

The argument was caught on video by a shopper who did not want to be named.

When the video starts, a group of about four protestors, a grey-haired woman and her elderly shopping companion are seen with four security guards standing between them.

It is not clear what started the initial altercation but as tempers flare, a woman can be heard shouting: “Go back to Europe.”

The grey-haired woman’s voice is indistinct but after she says something to the group a woman can be heard shouting.

The grey-haired woman promptly pulls a gun out of her pink body-warmer and points it directly at the group before being hustled off by security guards as a man and a woman are heard saying: “Shoot, shoot.”

The three people were removed from the parking lot after a further argument erupted.

Walmer SAPS responded to a complaint at #Clicks Walmer Park where a 52-year-old woman was allegedly involved in an altercation with #EFF supporters. This as part of #ShutdownClicks demonstrations nationwide.
📹 Supplied pic.twitter.com/T1KwmJh7kp

“It appeared that a 52-year-old female was involved in an altercation with EFF supporters at the entrance to Clicks Walmer Park.

“The police subsequently removed the individuals involved in the altercation and transported them to Walmer [police station].

“Upon their arrival at the police station, the parties all declined to lay charges.

“No arrests were effected and no cases are currently being investigated in the absence of any complaints.”

Earlier on Tuesday, Clicks attained an order preventing the EFF and its members from disrupting operations.

The order follows an application by Clicks after damage to some of its stores by EFF members unhappy about a hair product advertisement, which they deemed as demeaning to black people.

Clicks said on Monday that protests by the EFF had happened at 37 stores in KwaZulu-Natal, Gauteng and the Western Cape. Seven stores were damaged.

Protests have also taken place in Port Elizabeth but no damage has occurred.

The high court in Johannesburg on Tuesday issued an order in which it interdicted and restrained the EFF and those acting on its instructions from intimidating and threatening the employees of Clicks or any of its operations.

The order also interdicted the party from inciting violence against the ordinary commercial operations of Clicks.