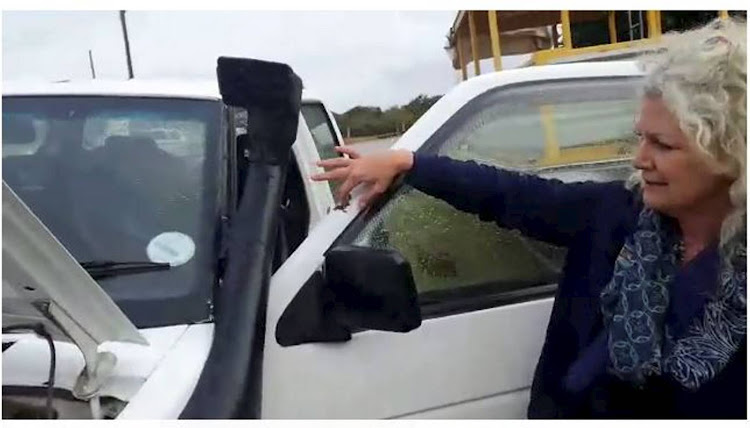 CLOSE SHAVE: Tania Steyn points out one of the bullet holes in her bakkie after surviving an attack in Daniel Pienaar Street on the outskirts of Motherwell on Saturday
Image: Supplied

The victim of an attempted carjacking in Daniel Pienaar Street, on the northern edge of Motherwell, has warned motorists to avoid the street, unless they are armed, and never to stop in the road if they do use it.

Tania Steyn, 52, said on Monday she and her companion, Pieter Dreyer, 60, were lucky to survive an armed attack.

“I just don’t want it to happen to anyone else, so I would really recommend that people avoid that road altogether or they should be armed, but even if they are they should never stop there.”

Steyn and Dreyer left their Rocklands farm on Saturday and were on their way  to the Sundays River Mouth campsite for the weekend when the incident happened.

“It was about noon and we were on Daniel Pienaar Street.

“It’s notorious for incidents but there was very little traffic and I wasn’t concerned,” Steyn said.

“Then as we came over the hill towards Motherwell, there was a dog lying in the road.”

Loath to leave the dog there, she pulled over onto the left shoulder of the road, got out, scooped it up and was on her way back to her vehicle when all hell broke loose.

“There was a dune slope on the other side of the road and these three guys came running down, each of them with a 9mm pistol, and they pointed them at us and started firing.”

One bullet hit the frame of the vehicle’s passenger window, another glanced off the roof and a third punctured the radiator — though she had not realised this until later.

“Then it seems they thought Piet was reaching for a gun and they ran away up the hill again,” Steyn said.

She immediately drove to the Motherwell police station to report the matter, but Steyn said they arrived there as a protest was being held outside and there were no police officers to help them.

They then decided to go to the Kinkelbos police station but, on the way there, smelt something burning in the engine and, after stopping to look,  realised that a bullet had punched a hole through the radiator and it was dry.

They were eventually rescued by friends, who towed them to Sundays River.

On Sunday, they formally opened a case and Kinkelbos police came to examine their vehicle and  take a statement, Steyn said.

“The dog had two broken back legs,” she said.

“I’ve no proof but my suspicion is it was deliberately done by those guys, who then placed the injured animal in the road as a trap.

“It was too badly injured and we had to have it put down.

“I think the only thing that saved us was that they [mistakenly] thought we had a gun.

“It seemed to me that perhaps they also ran out of bullets.”

She said she sympathised with police as the area was difficult to monitor because of the dunes and thick bush and, ideally, they needed to be equipped with a drone.

“We are investigating a case of attempted murder and we are looking for the three armed suspects,” he said.

“Regarding what the complainant says she experienced at the Motherwell police station, we are also investigating that.

“Service is important to us and we are not going to take that lightly.”