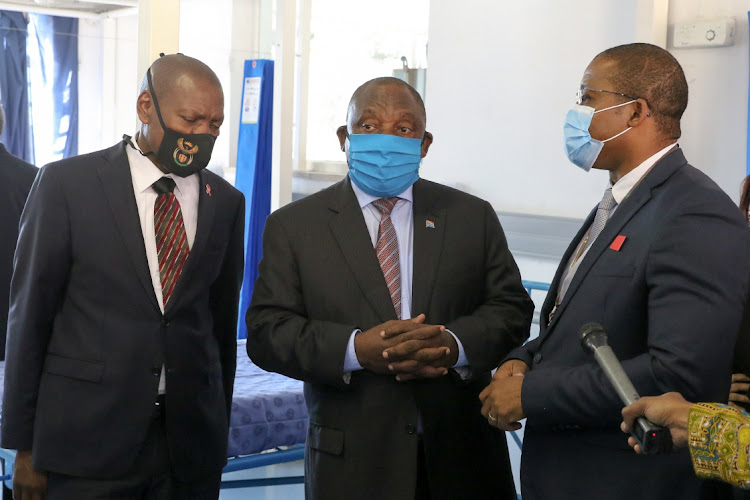 Shopping malls, Sassa offices, funerals and private hospitals — these are the drivers of the Covid-19 infections in Nelson Mandela Bay.

Motherwell was also singled out as the hotspot area in the city, with 79 cases registered by Thursday.

It is followed by KwaDwesi with 52 cases.

This emerged in a presentation delivered by Eastern Cape head of health Thobile Mbengashe during an oversight visit by President Cyril Ramaphosa to the Bay yesterday.

The Bay has 568 infections and eight deaths from the coronavirus.

This accounts for almost a third of the number of infections in the province.

Mbengashe said an epidemiological assessment of the metro had identified that funerals, shopping malls, Sassa offices and private hospitals were Covid-19 hotspots.

“We are going to be very reliant on national regulation of the lockdown. In the past, we used to have local teams that looked at the problems but now we’ve created fixed teams of epidemiologists and we’re following those journeys.

“In the case of Motherwell, we’ve identified where the hotspots are and our teams are going to go out there, screen people, follow the person, isolate, quarantine and if they need hospitalisation, do so,” Mbengashe said.

The Motherwell police station in NU10 was closed on Thursday after a police officer tested positive for Covid-19.

On Thursday morning, more than 100 SA Police Service  members were at the Raymond Mhlaba Sports Centre in Motherwell to be screened by health officials.

Some of them said they were unhappy with how the SAPS management was handling the matter.

The colleagues of the Covid-19 positive police officer said she had not been well for at least a week and they had to take her to Livingstone Hospital on Tuesday after she collapsed at work.

“Her temperature was checked daily and it had a normal reading like everyone else, ranging around 35.6°C, but we could see that she was not her usual self, she was not well,” one person said.

“Last week, we raised this with our line managers and they did not take us seriously.

“We even went so far as to report the matter directly to her immediate supervisor, and still nothing happened

“On Tuesday, she was really not well all. Myself and other colleagues had to carry her to the car.

“We went to fetch a few of her things at her house before rushing her to Livingston Hospital, where she was immediately admitted into ICU.

“We were in direct contact with [the patient] and yet none of us have been instructed to isolate.

“After our screening [on Thursday morning], we were told to report back for duty on Friday.”

Mbengashe, meanwhile, said the hotspot areas were driven by large numbers of people being infected at funerals and shopping centres.

“We’re talking with our colleagues at social development about Sassa offices and something is being done.

“We’ve also found that private hospitals have higher levels of infections,” he said.

In the metro, Shoprite in KwaDwesi, the Sassa office in Zwide, Checkers in Newton Park and Woolworths in Walmer were some of the stores in the metro that had been identified as hotspots in the retail sector.

Mbengashe said despite protests in the province, there were only 129 patients in hospitals, many of whom were there because they could not self-isolate in their homes.

He said there were 47 patients in isolation.

Of the Eastern Cape’s recorded number 31 deaths, 16 occurred in hospitals.

Mkhize said he was initially concerned about four things when it came to the Eastern Cape’s Covid-19 response — strategy, protective personal equipment, human resources and infrastructure

“I haven’t done any calculations but we need to look at June and July because we’ll have an outbreak that is out of control or there will be an infraction.”

Ramaphosa said he had been concerned about the rising number of Covid-19 infections in the province, but after receiving a thorough briefing from politicians and officials in the province he felt it was adequately prepared to deal with the months ahead.

“We’ve been very concerned at national level about the rising number of infections that the Eastern Cape has been showing,” Ramaphosa said.

Pleased with the presentations, he said he was glad that the province had finally woken up to the dangers of the coronavirus and was putting forward a clear health strategy  ahead of the expected spike in cases in August and September.

Ramaphosa said ministers and deputy ministers would be deployed in the province’s districts.

“Utilising the district development modelling in your approach to dealing with the pandemic is also a huge boon as far as we’re concerned.

“It’s through this model that we’ll be able to ensure we get to grips with Covid-19.

“We’re going to give you ministers and deputy ministers to work with you in each of the districts you have.

“They will continuously engage with you, working with you to make sure whatever challenges the province has are lifted to the national level,” he said.

Mabuyane gave a summary of the province’s handling of the pandemic and also outlined projects that could boost the Eastern Cape’s economy post- coronavirus.

He said the province had adopted a multipronged approach to amass knowledge about the virus and had developed a strategy to respond to the pandemic.

With 1,534 cases in the province, Mabuyane said Covid-19 existed in every corner of it.

“At some point on the first of May, we thought we’re moving on an average of 40 infections per day but we had a jump between the level 5 and 4 stage that took us to 148.

“But yesterday we dropped by 30 in terms of the results that came through from our labs,” he said.

Mabuyane said part of the Covid-19 outbreak was at correctional services facilities, particularly in the Buffalo City municipality.

“In the Queenstown area and Port Elizabeth, there were a few cases registered,” he said.

Mabuyane said overcrowding in prisons played a role in increasing the number of cases.

He said 181 inmates and 52 prison officials had tested positive for the virus in the province.

Mkhize, who was previously unimpressed with the strategies presented by the province, commended the provincial government on the work it had done following his previous visits.

“The province is on the right track,” he said.

“Infections took a bit longer to come here and found everybody not ready at all and the team was not quite coherent. .

“It takes about five minutes of listening to hear if they are on the right track or not, but this time around, I’m happy.

“The challenge here is that both in the Western Cape and Eastern Cape, the pandemic was getting to an outbreak that will get out of control if we don’t change our strategy and this team has understood that,” he said.

He said a few billion rand  was needed for the agricultural catalytic projects for dairy, vegetables and produce farms that would create more than 10,000 jobs in the province.