Borehole repairs stopped as residents call for slice of pie 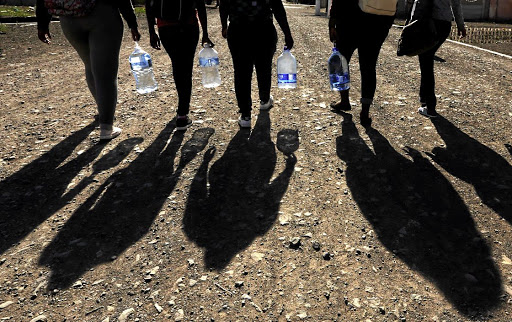 Residents of Serala View and Flora Park in Polokwane have had to rely on municipal water tanks after low pressure from a nearby reservoir resulted in taps running dry. They've blocked a contractor from working and are demanding subcontracts. / ESA ALEXANDER

Residents from posh suburbs in Polokwane, Limpopo, have not had running water for a year after they stopped a R5m project.

Residents of Serala View and Flora Park claimed they had not been informed about the project and demanded to be appointed as subcontractors.

The contractor, who was appointed on an emergency basis to work on an existing borehole, was kicked out of the area last Monday.

Project steering committee member Kholo Mashangoane told Sowetan they were not going to allow the project to continue without residents being involved.

"We were surprised to see earth-moving equipment on site working. The community is busy putting structures together to work on the project with the contractor.

"The contractor was not introduced to the steering committee and we don't know how many workers will benefit from the project.

"It's unfair for our skilled, unemployed people to see jobs being done by people who are not locals," Mashangoane said.

She said they have already identified job opportunities for five people in the project.

"Some of the work is just general and many people can do that. We are not saying the project must not continue but we want things to be done according to procedure.

"We are tired of carrying water containers outside our gates awaiting water tanks from the municipality," she said.

Mashangoane said the community was expected to meet yesterday to finalise the nomination of structures that will monitor the project, which has since stalled.

"We are not going to allow community members to interfere with the project because their jobs is to monitor. We received text messages from people, saying the project can't go ahead as they also want jobs and contracts."

Residents have been receiving water from municipal water tanks since April last year.

This was as a result of the reservoir failing to supply water due to lower pump pressure.

Mothapo said the contractor left because residents demanded to be subcontracted.

"Mayor Thembi Nkadimeng said water is a basic need for our people and the municipality will do everything in its power to make sure the project proceeds. We are not going to allow people to block service delivery. We appointed the contractor, who specialises in water supply, to put equipment in the borehole," he said.

Mothapo said the contractor was only doing specialised work and that there were no sub-contracts.

He said the project was not subjected to tender processes because it was an emergency and will take only two months.