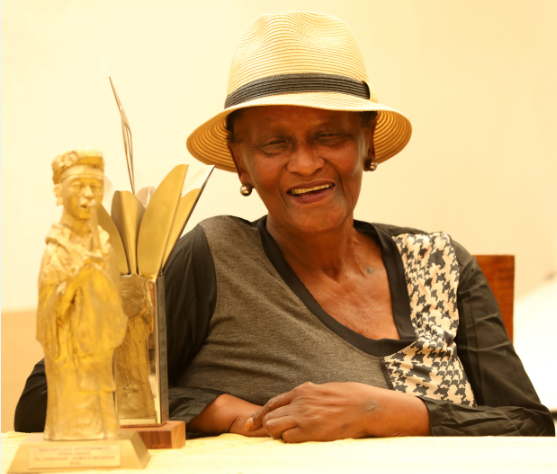 Veteran Eastern Cape TV, film and stage icon Nomhle Nkonyeni, 77, who is set to receive the prestigious Order of Ikhamanga from President Cyril Ramaphosa later in April, said the award was long overdue.

Speaking from her New Brighton home on Tuesday, Nkonyeni said while she was excited and humbled by the award, she was baffled as to why she was only recognised by the presidency now.

“I’m not complaining,” the seasoned actress, who has been in the industry for more than 50 years, said.

“If I tell you about the work that I’ve done over the years, it would take me forever.”

On April 25, Ramaphosa will recognise Nkonyeni for her contribution in arts and culture.

She will be handed the Order of Ikhamanga in Silver – an award given to SA citizens who have excelled in the fields of arts, culture, literature, music, journalism and sport.

Nkonyeni has been in numerous television and stage productions, including her most recent role in Scandal!

She has also held her own in several series like Igazi and Gaz’lam, among many others.

In 2016, she received the lifetime achievement honour at the SA Film and Television Awards, and was recognised in the same category at the 2018 Eastern Cape cultural awards.

In her breakthrough role in 1981, Nkonyeni was cast in the play, Die Swerfjare van Poppie Nongena, at the Capab (Cape Performing Arts Board) theatre in Cape Town.

The 1978 novel tells the story of Poppie and her nomadic life, trials and tribulations as a black woman in apartheid SA.

“I was the first black person to perform on that stage and when that door opened, I never shut it,” she said.

Nkonyeni then moved to Gauteng, where she worked for the Performing Arts Council of the Transvaal from 1984 to 1996.

“I’ve been in the industry for more than 50 years and the journey has been tough.

“The first 10 years, as an amateur, we had no resources at all,” she said.

“But because of the love for the craft and what we felt we had to highlight, fighting the regime of yesteryear, it was quite a challenge.

“We didn’t bother about the [apartheid government’s] laws, we didn’t do the applications to perform for an integrated audience, we just went on defying the government of the day, so those were the challenges that we faced – but we sailed through them.”

Nkonyeni lists Athol Fugard and Ilse van Hemert as two of her favourite directors and producers with whom she has worked.

“Athol Fugard taught me what I have learnt . . . actually, most of the directors I’ve worked with are very good because I gave them what they wanted – I never had a fight with them.”

Asked about the industry today, Nkonyeni said: “It’s in shambles.

“We don’t get enough support from local or provincial authorities – we don’t get it.

“In 2005, we had to shelve a production I worked on with youngsters.

“We finally managed to do it in 2009 when I took it to Grahamstown [Makhanda], but it took a lot of blood, sweat and tears.”

The actress said she was working on another production that would be staged at the Opera House until Friday.

“It opened [on Monday and] it’s a wonderful story – quite enlightening, very tragic

Nkonyeni said it was her dream to open an arts academy in New Brighton.

“There is an abundance of talent here, in fact, most of the talent that’s in Johannesburg comes from the Eastern Cape.

“It’s my dream to leave a legacy behind – I don’t want God to ask me when I get up there what I’ve done with the talent He’s given me.

“He wants me to share that talent and I feel I want to answer my Lord.”