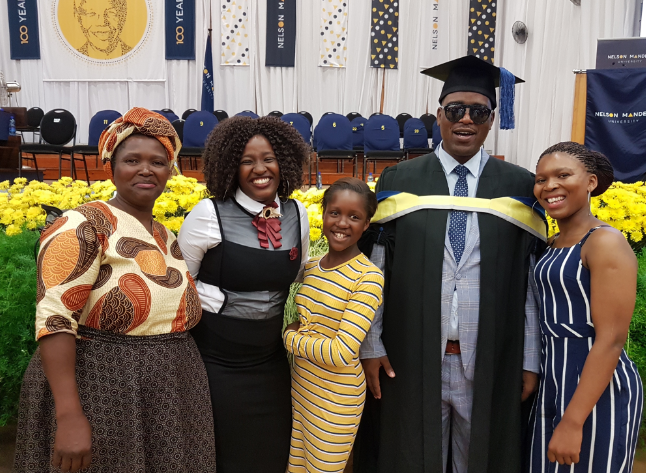 Just more than a year ago, Avukile Jeke, 27, threw in the towel with his studies because of a very difficult undergraduate journey.

The plan? To pursue an opportunity to fulfil his lifelong dream of teaching and exposing his pupils, particularly the disabled, to opportunities that have seen him continuously climb to greater heights.

When that did not pan out, Jeke conceded defeat, resumed his honours course and soldiered on.

This week, as he crossed the stage at the Nelson Mandela University South Campus Indoor Sports Centre to rapturous applause and ululation, and a standing ovation on and off the stage, Jeke found himself thankful for what had at the time seemed like a big obstacle.

“The journey was so difficult in my undergraduate university experience, I decided to quit and look for an alternative path to follow,” he said.

“As a result, I started looking for a job to compensate for the lost academic year because I believed I would never manage my studies.

“Fortunately, I found a job. The unfortunate part, however, was the lack of funds to transport me to and from the workplace.

“I did some introspection and realised this was a sign I needed to pursue my studies and get another qualification.”

He was part of the group of students initially not admitted to the university due to the lack of adequate faculties to accommodate completely blind students.

The University’s Universal Accessibility and Disability Services (UADS) unit has since vastly improved its facilities, working closely with organisations working with the blind in developing comprehensive support for the students.

Since beginning his studies at the university in 2014, Jeke – a first-generation graduate – has made it his mission to excel in all that he does.

Jeke said he pursued the degree because he wanted to teach the language as a means to preserve it in its purest form.

“It pains me that our mother tongue is dying – people speak it, but not in its purest form,” he said.

“If you lose that, you also lose your identity.”

The former Mthatha’s Ifata School for the Blind pupil said when he started at varsity, he expected the same special treatment that he was afforded at the school, which catered solely to the visually impaired.

“But as time went by I realised that I should never expect to be granted special attention.

“One of the best ways to gain due recognition by a lecturer in class, and to obtain excellent academic marks, is active participation and asking critical questions.”

During his time at the university, Jeke won the hearts of many and garnered quite a following from his peers, many of whom were influenced and inspired by his gallant character.

He is an avid sportsman and was once a popular sports presenter on the campus station Madibaz Radio.

In his five years at the institution, he has also served on the Student Representative Council and as a house committee member at one of the men’s on-campus residences.

He was a tutor in the applied languages department and student assistant in the (UADS) unit.

His beaming mother, Zandile, who was surrounded by his siblings, could not be prouder of her son.

“I don’t know how he keeps on doing it but I’m extremely proud of him,” she said. “He’s going far, this one.” Williams, 39, is following a similar path, having joined the institution in 2018 with three qualifications under his belt and the honours his fourth.

Williams, who was born with full sight, grew up in the rural areas of Lady Frere.

He lost his sight in 1987 following a medical procedure in a bid to cure severe headaches.

“The incident, however, did not stop me from chasing my dreams, like every child.

“I will always be grateful for the support from my family and those who continue to make it possible for me to achieve my goals.”

UADS head Nosiphiwo Delubom said the unit was “proud of these students and the lecturers as well for their persistence and unending support to the students”.