Meet the Watsons: Brothers in struggle often in headlines - for the wrong reasons 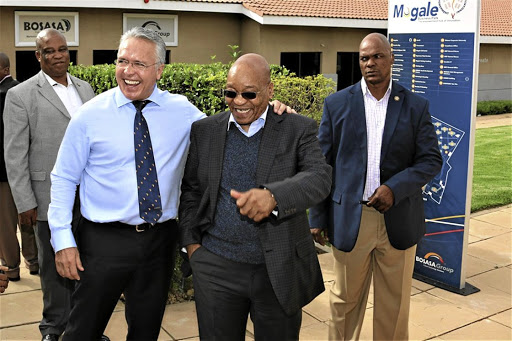 Gavin Watson with then president Jacob Zuma on a visit to the company's Krugersdorp headquarters in April 2015
Image: Twitter

The Watson family first entered the public consciousness back in the 1980s when Daniel "Cheeky" Watson‚ a formidable rugby player‚ created a furore by deciding to play with black South Africans - turning down his opportunity to join the Springboks.

The sacrifice made him a local hero.

Last week the Watsons made it into the headlines again‚ this time after brother Gavin was accused‚ at the Zondo commission‚ of corruption on an obscene scale.

In a damning video seen by the commission Gavin is shown counting R1m in cash‚ allegedly money for bribes to secure lucrative contracts.

Former chief operations officer for Bosasa Angelo Agrizzi took the stand for the second time at the state capture inquiry on Thursday January 17 2019, where he detailed how bribe money was moved, stored and paid out by Bosasa.

The roots of brothers Gavin‚ Ronnie‚ Cheeky and Valence lie on a farm near Somerset East in the Eastern Cape.

Their father was said to have been a fundamentalist lay preacher who taught his sons all people are equal.

Today the brothers remain staunch Christians. "We were 'born again'‚ but with a bit of a difference‚" Cheeky said in 2007.

"They don't drink alcohol‚ they are all very religious‚" said an acquaintance.

"They mostly keep to themselves‚ you don't see them out and about socialising much. They are low key but very wealthy."

The Global Intel website estimates the family's net worth at between R6bn and R13bn.

When they were still young rugby players‚ and playing with other races was banned‚ Gavin and Valence once had to lie flat on the floor of a taxi that took black players to a stadium circled by armoured vehicles.

Cheeky's son‚ Luke Watson‚ who was controversially selected for the Springboks‚ also became notorious in 2008 for saying the Springbok rugby jersey made him want to vomit‚ though this didn't stop him being signed to a three-year deal with the EP Kings two years later.

By 1978 the Watson family were members of both the then-banned ANC and SACP.

How Angelo Agrizzi fought and lost battle for Bosasa

A failed bid to take over Gavin Watson's Bosasa is being put forward as the dramatic backdrop to Angelo Agrizzi's damning evidence at the state ...
News
2 years ago

We’re complicit in the looting

I can’t remember the exact year, but I do recall how, one December, I incessantly harassed my domestic worker grandmother and grant recipient ...
Opinion
2 years ago

In his book‚ Reflections of an ANC Cadre‚ former defence minister Charles Nqakula wrote of brother Ronnie's work as an intelligence agent.

Nqakula had apparently been introduced to him through Chris Hani.

"[Ronnie] Watson had recently survived an assassination attempt in Gaborone when a certain Stephen Burnett entered his hotel room carrying a gun. Watson‚ who was built like a bodybuilder‚ disarmed him and gave the would-be assassin a bloody nose.

"Burnett was arrested and appeared in court in Gaborone‚ where he claimed to be a member of Britain's Special Air Service. Giving evidence‚ Watson said Burnett told him he worked for the South African security services. He was sentenced to five years in jail‚" wrote Nqakula.

Though the actions of Cheeky‚ along with his siblings‚ were widely publicised for decades and centred on their links with the ANC and SACP and their activism‚ the publicity wasn't all good.

In 1986‚ the Sunday Times reported that Valence‚ Ronnie and Cheeky were charged with arson‚ fraud and attempted murder‚ after being accused of hiring two men to set alight their family home.

This was supposedly to claim on a more than half-million-rand insurance policy‚ after their family business was liquidated.

The brothers denied the charges‚ saying the fire had been started by unidentified men who had tried to frame them.

In December that year‚ Valence was found guilty of fraud and arson‚ with his two brothers escaping conviction.

However‚ the following year the conviction and 30-month sentence were set aside in the Grahamstown Supreme Court.

The brothers claimed they were being targeted for their anti-apartheid stances‚ with Valence telling the Sunday Times in August 1987: "The psychological warfare and attempts on our lives will continue."

Asked about the arson case‚ Gavin told writer Adam Hochsnight how police had asked him to help control the cheering crowd at court after his brothers' acquittal.

"The captain of the police came to me‚ and asked me to please stop the crowd from breaking down the doors. The court doors . Asked me!" Gavin told the writer.

In 2003‚ Valence joined in the slating of Vanessa Brereton‚ a human rights lawyer who admitted to being an apartheid spy.

In 1990‚ she had been elected treasurer of the Port Elizabeth ANC branch‚ though she was acting as a government informant.

Outside the recent media coverage‚ Gavin has also been at the centre of numerous negative allegations over the years‚ particularly during his tenure at Bosasa.

As recently as last year‚ the company was insistent that there was no contract between itself and President Cyril Ramaphosa's son‚ Andile‚ who allegedly received a contract for R500‚000 for financial consulting.

The DA has suggested there may have been special treatment in granting the contract‚ and applied for access to it.

Ramaphosa claimed he had learnt the money was paid‚ on behalf of Gavin‚ into a trust account used to fund Ramaphosa's election campaign.

In 2010 reports emerged that Gavin was under investigation by the Hawks for allegedly bribing top prison officials in exchange for lucrative state tenders worth R1.7bn.

Recent news about Cheeky has been critical.

He was accused of failing as head of the Eastern Province Rugby Union in 2015‚ and last year was charged with fraud and money laundering for his alleged part in the looting of money given to the Nelson Mandela Bay municipality.

Cheeky was charged over his alleged role in the misappropriation of R2.9m meant for the Integrated Public Transport System.

‘Cheeky told me to pay it’

Watson: I saw nothing wrong

The former EP Rugby boss made the claim in his plea explanation in the Port Elizabeth Commercial Crimes Court on Tuesday, when he also learnt that he ...
News
3 years ago

The brothers came close to being Hollywood celebrities. Author Kristin Williamson recounted how when they visited Tinseltown in 1986‚ at the height of apartheid oppression‚ a television series about their lives was proposed.

"At the time‚ being pro-ANC was akin to being a terrorist‚ so the script fell victim to the American 'Standards and Practices' ruling. Warner Brothers dropped the project‚" she wrote.

The commission of inquiry into state capture has heard damning evidence from its surprise witness, Angelo Agrizzi, since Wednesday January 16 2019. Tiso Blackstar associate editor, Ranjeni Munusamy and Sunday Times political reporter, Qaanitah Hunter have a sit-down discussion about what this evidence could mean for the commission, and other witnesses, going forward.