Sharks get their teeth into search for glum WP fan 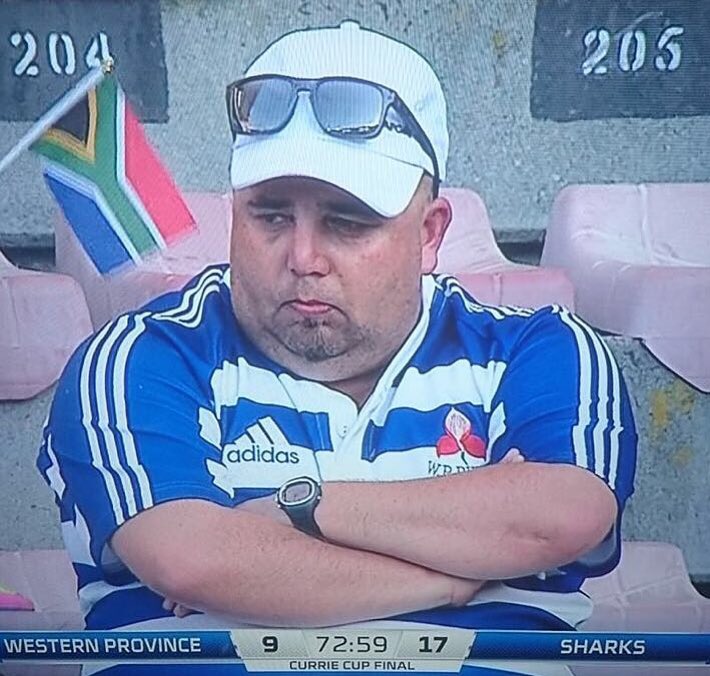 The Sharks offered rugby fan Jacques van Wyk one of their jerseys after his team, Western Province, lost to them in the Currie Cup final.
Image: The Sharks / Twitter

Despondent‚ defeated, miserable – that was the look captured on rugby fan Jacques van Wyk’s face as he watched his team‚ Western Province‚ go down to the Sharks in the Currie Cup final at the weekend.

As a glum-faced Van Wyk sat in the stands of the Newlands Stadium in Cape Town‚ he had no idea that the cameras panning the crowd had singled him out.

Clad in a Western Province jersey, his face – and arms folded tightly across his chest – said it all.

This was one hugely unhappy fan!

A day after his image was captured‚ the Sharks posted it on their Facebook page.

“Help us find this man. We are looking for any information connected to the man in this photo,” the team wrote.

“We would like to send him a jersey to cheer him up.”

Help us find this man 👇👇 We are looking for any information connected to the man in this photo. We would like to send him a jersey to cheer him up. 😉

In no time at all‚ Van Wyk had been tracked down.

He said on Monday he was still sad his team had lost.

“But the best team won at the end of the day‚” he said.

He found his instant fame amusing.

“My phone has been ringing non-stop,” he said.

“Guys from all over the country have been calling and I have people ‘Facebooking’ me from the UK and the US.

“The majority are saying they feel the same way I felt.”

I would wear [the Sharks jersey] for just one photograph though – not again!

Asked whether the Sharks had made contact yet‚ Van Wyk said he was still waiting.

He said he would be willing to accept a jersey from them – but that did not mean he would be ditching his team any time soon.

“I would [accept the jersey] for the love of the game. I would wear it for just one photograph though – not again!”

Despite his team’s loss at the weekend‚ Van Wyk remains a staunch WP supporter.

“I was born and grew up in the Cape‚ so I will always support my team‚” he said.

“I will only support [the Sharks] when they play against the [Blue] Bulls!”