Doctors give fingerless girl a toehold on normal life 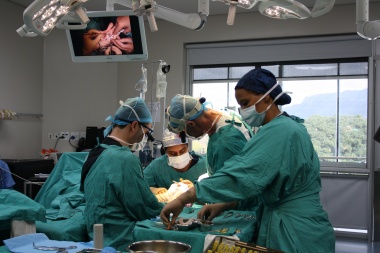 A four-year-old girl who was born with only one fingerless hand has had a toe transformed into a finger in the first operation of its kind in South Africa.

It was the fourth time Van der Velde had operated on the little girl‚ named only as Angelique‚ who will spend the next few months working with occupational therapists.

A statement from the Western Cape health department said: “She should start moving the finger and grasping large objects between the new reconstruction and her bone-lengthened thumb.”

Angelique was born with bilateral symbrachydactyly‚ a congenital condition in which there are various degrees of missing and shortened digits.

“Usually‚ symbrachydactyly occurs only in one limb‚ but in her case she was born without a hand on her left side and without fingers on her right hand — apart from a very rudimentary right thumb‚” said the health department.

Just over six months later‚ he did a third graft to lengthen her thumb.

“All of these small bone grafts helped to lengthen the little she had and gave her a very basic fine pinch grasp‚” said the department.

But Van der Velde realised she needed a wider grasp.

While she will always remember her as a little girl with ponytails, 25-year-old Vanessa Neveling – who died last week after a double lung transplant ...
Your Weekend
3 years ago

When Nombuyiselo Skafu arrives at the start of the South African Transplant Games in Nelson Mandela Bay this weekend, it will be a victory lap for ...
Your Weekend
3 years ago

“Knowing that bone grafts don’t grow in proportion to the child‚ I sought the help of the world’s top pioneers of paediatric microvascular toe transfers‚ who guided and encouraged me‚” he said.

“The difference between a bone graft and a whole toe transfer is that a graft is a single bone without a blood supply whereas a whole toe comes with a blood supply‚ nerves‚ tendons and nail and confers far more length than a graft.”

Several toe transfers have been performed in SA on adults who have lost fingers in accidents‚ and a toe-to-thumb transfer in a child burn victim was completed 10 years ago. But there has never before been a toe transfer for a child born without fingers.

Western Cape health MEC Nomafrench Mbombo said the department was proud of its doctors.‚ “who continuously strive to provide outstanding tertiary care for all patients of the Western Cape and beyond”.

She added: “Our clinical team continues to soar‚ placing the Western Cape Department of Health on the global map by providing these life-changing surgeries.”