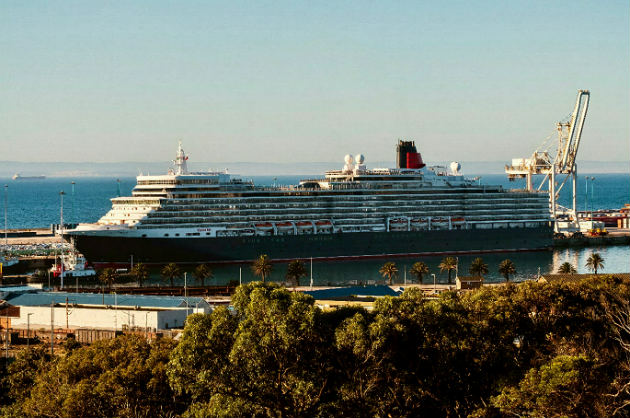 The Queen Elizabeth docked in Port Elizabeth at the weekend as part of a four-month world cruise
Image: SALVELIO MEYER

Nelson Mandela Bay is entering a new era of cruising by not only attracting a growing number of passenger liners annually, but specifically more of the larger and very opulent liners offering roundthe-world cruises.

Illustrating the trend highlighted by port and tourism officials, luxury liner the Queen Elizabeth visited Port Elizabeth on Saturday on the 92nd birthday of the ship’s royal namesake.

“In the past three years, we’ve had all three of Cunard’s Queens – the Queen Victoria, the Queen Mary 2 and the Queen Elizabeth – visiting,” Transnet National Ports Authority (TNPA) port manager for the Port of Port Elizabeth, Rajesh Dana, said.

“What is interesting is that we are now attracting the larger and more luxurious liners.

“We’ve also had a general increase in passenger liners calling at our port.

“This year, we’ll have had two more calls than last year.”

Emma Momberg, Whitestar Cruise and Travel’s representative in the Eastern Cape and Garden Route, agreed that the Bay was now a very popular port of call for five-star cruise brands as part of their world cruises.

“We have seen brands such as Cunard, Seabourn, Holland America Line, Oceania and Regent Cruises include Port Elizabeth in their itineraries when cruising the South African coast,” Momberg said.

“Ponant – a five-star product with mega yachts – is returning annually to Port Elizabeth now as part of a coastal cruise between Cape Town and Durban in March after its South America and Antarctica itineraries, and before starting its Scattered Islands itinerary in the Seychelles.

“Port Elizabeth offers beauty as well as cultural history for cruise visitors together with the opportunity to see our wildlife in the region.

“While our port lacks some facilities for cruise guests compared with Cape Town and Durban, which restricts it from being an official embarkation and disembarkation port, [it] is definitely a favourite port to visit for discerning cruise guests.”
The Queen Elizabeth arrived here from Port Louis in Mauritius shortly after 5.30am on Saturday and sailed for Cape Town at 9pm. From there, it heads for Walvis Bay and the islands of Tenerife and Madeira, before ending its world voyage on May 10 back where it started in January – in its home port of Southampton.

Dana said the Queen Elizabeth and its 1 866 passengers and 938 crew had arrived and left in ideal conditions.

Its woman captain, Inger Klein Thorhauge, from the Faroe Islands, noted the “brilliant weather” and had high praise for the skills of TNPA pilot Andrew Kerfox, who brought the ship into port.

Kerfox, 39, said: “Docking these vessels is quite challenging because of their sheer size.

“However, the competence of the master and crew of the vessel, together with the vessel’s manoeuvrability, makes the pilot’s job easier.”

“But the Queen Mary 2, which was here in January, is the biggest passenger ship to visit this year, with an overall length of 345m and a gross tonnage of 149 215,” Dana said.

Well-heeled passengers had made the most of the good weather and spent the day exploring the Addo Elephant National Park, canoeing on the Sundays River and visiting five-star private Eastern Cape game reserves, among other things, Momberg said.

Incredibly, one of the passengers – 90-year-old Ramon Dansa from Barcelona – has already undertaken 23 world voyages and other shorter journeys on board the Queen Elizabeth.

He had already spent 3 285 days at sea prior to the present trip, according to cruise sales manager Andrea De Castro, from Brazil.

“He spends most of his year on the ship and has already booked his 2019 and 2020 world voyages, and also his 2018 and 2019 summer voyages,” De Castro said, while conducting a tour of the vessel for Bay media and travel industry guests.

The Queen Elizabeth will return to Port Elizabeth in January and November next year, though not on world cruises but on shorter grand voyages.

The Queen Victoria will revisit in April next year and the Queen Mary 2 will return in March 2020.