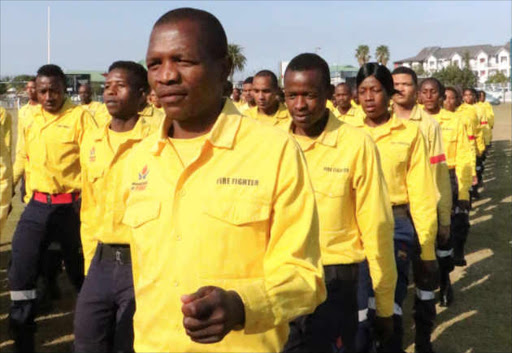 “These kinds of natural disasters are going to occur more often because of climate change and because of other things. And so you are the backbone of keeping people safe and keeping property safe.”

Chriszando Jacobs, 24, of Paarl, was among those who arrived in Knysna on Wednesday last week as the fire flared up.

“We were deployed at about 12pm and arrived here at about 9.30pm. We had a snack to eat and they deployed us but there was nothing we could do. By that time, people’s houses were burning.

“It was so sad to see how people’s houses were burning, their cars were burning,” he said. “This is one of the worst fires I’ve seen. “I’ve never seen so many houses burn down at the same time. I have never seen people trying to take out the fire with so many firefighters, so much equipment, and still be unable to contain the fire.”

Jacobs, who advised residents to keep their yards clean and create firebreaks as a measure to prevent fire, said he appreciated the government’s acknowledgement.

“Next time you will work even harder because people from all over the country are looking up to you. You are a hero here in your country, as a firefighter.”

Another firefighter, Nontlantla Ntsika, 26, said she had become a firefighter to save lives.

But fighting the Knysna fires – far from home in Rouxville in the Free State – came with challenges.

“I want to be a hero for South Africa. I’ve protected a lot of people, houses and animals. I appreciate [the acknowledgement from the government] because it shows we make a difference.”

Firefighter Lindokuhle Monakeli, 25, was among a group of Working on Fire firefighters deployed to put out sporadic fires in Wittelbos near Storms River yesterday morning. Monakeli said reports of injuries to firefighters and residents had shocked firefighters and sobered them to the dangers of their work.

“We were deployed to Knysna on Wednesday and all we wanted to do was to get there and protect the environment and save whatever we could.”

Van Rooyen thanked the firefighters for their efforts.

“We are very proud of all the good effort you have thrown behind this unfortunate event,” he said.

Meanwhile, the Western Cape government allocated R75-million towards the disaster-stricken areas and towns along the Garden Route.

Van Rooyen said a resolution taken at a Western Cape cabinet meeting in Knysna yesterday morning would be taken to the national government as “we are obliged by our constitution to collaborate and work together under such circumstances”.

He said the national government must do everything in its power. “We are joined by the constitution to ensure there is normalcy and that lives are restored.”

Van Rooyen said President Jacob Zuma would be in the Garden Route today. “We are still finalising details but we expect him to be here.”

Zille said there would be four main sources of money used to redevelop the economy of areas affected by fire.

“It is the provincial money, national money, private donations and insurance industry. We put all these sources together to turn it into an opportunity for redevelopment of the economy.” – Additional reporting by Siyamtanda Capa