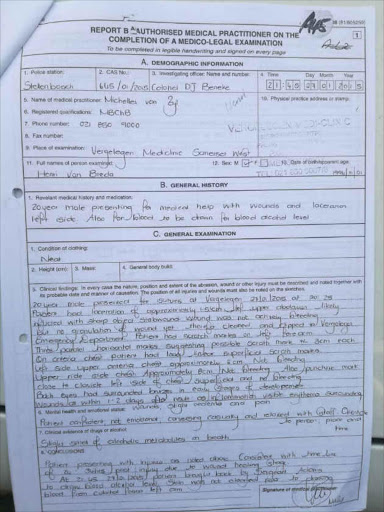 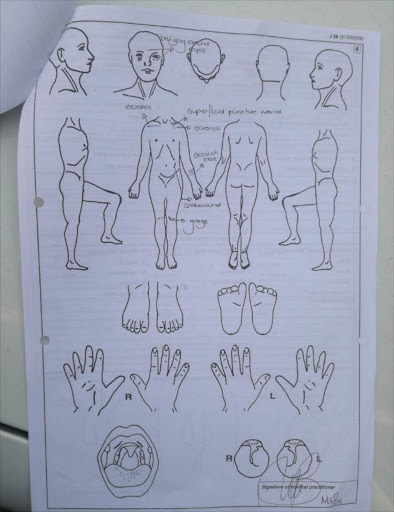 An emergency doctor has confirmed what was heard in the High Court in Cape Town last week: triple axe murder Henri van Breda’s wounds were “superficial” and did not require stitches‚ and he had no signs of a concussion.

Van Breda stands accused of murdering his parents and brother‚ and attempting to murder his sister at their luxurious home at the De Zalze security estate in Stellenbosch on January 27 2015.

Dr Michelle van Zyl‚ the only witness on day 15 of the trial‚ told the court: “I saw Henri Van Breda in the evening at Vergelegen Mediclinic. He had a few 3cm scratch marks‚ a chest scratch of 6cm and another one of 8cm. None of them were bleeding and all were superficial. They did not require stitches so I just put clips on them. He was a hundred percent orientated‚ and showed no signs at all of a concussion.”

Van Zyl said Van Breda was “friendly and relaxed” when he first visited the hospital of his own accord with a family friend at 8.25pm on January 27‚ and she said she could faintly smell alcohol on his breath‚ almost a full day after Henri testified to having drunk wine with his family at their home.

She said she was not at all aware of the horrific murders at the luxury estate at that point‚ and the court agreed on Monday that she would not testify on the conversation she had with Van Breda then because of “doctor patient privilege”.

His demeanour had changed‚ however‚ when police brought him back to the hospital as a possible suspect an hour later to be examined and for blood to be drawn to be tested for alcohol.

When defence counsel Piet Botha asked why she detailed three scratches and not four on his arm — despite another doctor‚ Dr Lizette Albertse‚ who had seen him and noted four — she replied: “I did not examine him forensically. I noted only what I had seen while treating him.”

Van Breda claimed in his plea statement that he had been in a scuffle with an intruder on the morning of the murders‚ and had sustained injuries from a knife in the process. He also claimed he had lain unconscious at the bottom of the staircase at the luxury home after the encounter with the intruder.

Last week‚ a forensic pathologist testified for the state that several of his wounds were most likely “self inflicted”.