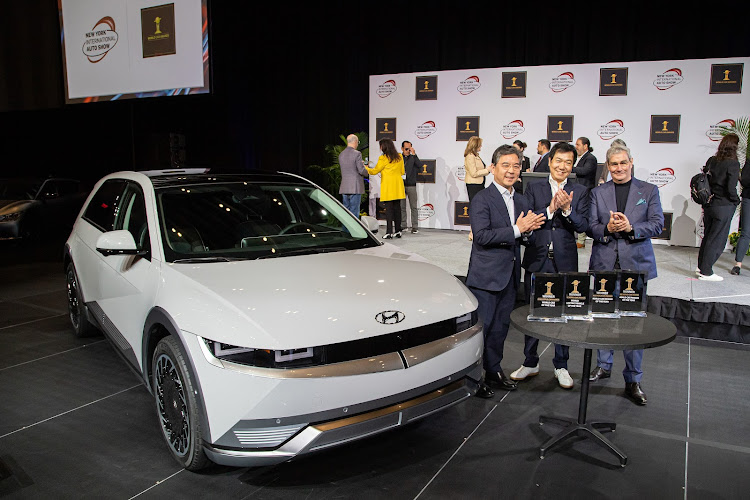 Hyundai scooped the honours at the 2022 World Car of the Year awards, with its battery-powered Ioniq 5 declared the overall victor as well as winning the categories for best electric vehicle and best design.

A jury of 102 international automotive journalists from 33 countries selected the winners by secret ballot, and the results were announced at the New York International Auto Show on Wednesday.

The jury also named Luc Donckerwolke, Hyundai Motor Group’s design chief, as its 2022 World Car Person of the Year. He was cited for his role in overseeing innovative new models, including the Ioniq 5 and Kia EV6.

The Hyundai Ioniq 5 was chosen from an initial entry list of 28 vehicles from around the world, and beat the Ford Mustang Mach-E and Kia EV6 (the 2022 European Car of the Year) in the final shortlist of three cars. Reflecting the automotive industry’s growing move to battery-powered vehicles, all three finalists were electric compact SUVs and so was the 2021 winner: the Volkswagen ID.4.

A number of countries are set to ban the sale of internal-combustion engine (ICE) vehicles in the coming years, which has prompted most brands to scale up their production of EVs. In 2021 6.75-million EVs were sold globally, more than double the previous year’s figure, and about 16-million electric cars are on the roads worldwide.

Similar in size to the Hyundai Tucson SUV, the Hyundai Ioniq 5 is the first product to be marketed under the electric cars-focused Ioniq sub-brand and was revealed globally on in February 2021.

“Our game-changing EV has made a strong impact on increasingly eco-conscious and demanding consumers around the world, and its success supports the acceleration of electrification of the automotive industry,” said Jaehoon Chang, president and CEO of Hyundai Motor Company, in accepting the awards.

“The pace of change at Hyundai will continue unabated through the rest of 2022 as we will soon be adding to our award-winning Ioniq range.”